Voting in The Hague (Or: The Ukraine referendum)

Marco and I went to a voting center in the neighborhood to vote on the Ukraine referendum (ABC news – English). Well, he voted – I can’t yet. The weather turned pretty bad in the late afternoon, with pouring rain at times, but luckily it had mostly died by the time we went out.

I’m not a very political person, but basically the referendum is about a trade agreement between the EU and Ukraine, with some opponents saying it is really a thinly veiled stepping stone towards Ukraine asking for EU membership. 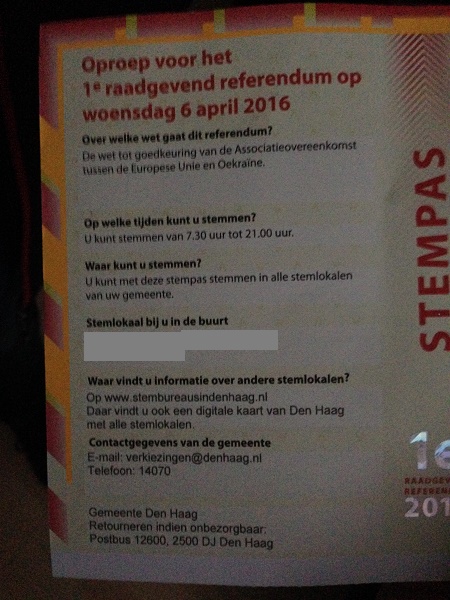 Voting card (or “Stempas” in Dutch)

In the end there wasn’t much to report on – while we had gone to a voting place which should have been a rather popular choice, there was no one else around voting at the time. (Which was to be expected – it remains to be seen if the Netherlands will get the 30% of voters needed to make this vote count, whatever the result is. But if they mange that, it would be “just barely”). Marco says the voting card only asked one question – to state if you were for or against the referendum. It was over before we knew it!

“Your behavior in the voting area” – The images are probably enough, but 1) Have your voting card and ID card ready 2) Don’t block the view of the voting bureau workers 3) Only one person per booth

Interestingly, the voting card said that voters only needed to have an government-issued ID that was valid through April 6, 2011 – that is, 5 years ago. And no, it wasn’t a typo.

Marco says he will take me along for next year’s vote, for the Dutch elections. That should prove to be more lively.