I am now fully vaccinated. I received my second shot (Pfizer) this afternoon. The location was less busy than when I received my first vaccination on 21 June, but that week the Netherlands vaccinated just under 1.5 million people and this week there are around 1 million appointments. I think the main difference is that there are less people getting their first shot and more getting their second, but vaccine deliveries could also be playing a small part.

We still have at least 3-4 weeks to go at this rate, if you consider that the Netherlands opened vaccinations to the general population based on birth year. I’m 38, so there’s still at least 20 years behind me waiting for their second shot. If you also consider that vaccinations were only recently opened to 12-17 year olds, you could imagine this going on for another 2-3 months at a reduced rate.

Above is the sign by the vaccination location, the Broodfabriek in Rijswijk. Literally translated as “the bread factory”, which it used to be years ago. In recent years it is an event center and this year it is rented out to The Hague’s Public Health department for the vaccination program.

That’s useful (Or: Store map of Blokker in Rijswijk)

I saw something cool in Rijswijk’s In de Bogaard shopping centre: a Blokker store with a map by the entrance:

The map makes it easier to see where you need to go before you enter the store so that you don’t mindlessly wander up and down the aisles (and up and down again, seriously) trying to find what you are looking for. And the store map goes perfectly with one of their corona measures: Koop doelgericht or “Buy purposefully”. In other words, know what you want (when possible), get in, get out. Kudos. More stores should have maps at the entrance and/or provide them online.

So Blokker is pretty smart. For a less than smart company, try the Samen restaurant in The Hague. It’s an all-you-can-eat buffet. For the last few months the rule in the Netherlands has been that up to 100 people could gather inside or outside, including restaurants. But since it is going in the wrong direction (we’re up to 3,000 cases per day now, from nltimes.nl) a lot of places are only allowed to have 50 people inside or outside. Including The Hague. And then you get this…

Crowded Hague restaurant busted with 200 guests; Covid rules allow only 50 from nltimes.nl. (nos.nl reported that it was 200-300 guests.)

While most of the blame must lie with the restaurant, I think people must be mathematically challenged if they don’t turn around when they see the actual restaurant area and demand their money back. I’m trying to give some people the benefit of the doubt, since if you came early it probably wasn’t that busy… but really, people. Come on.

Field outside of Rijswijk Station (Or: Okay, it’s tiny)

Here’s an interesting photo from just outside of Rijswijk train station. I’m not entirely sure what the wooden columns are supposed to represent, but hey, it’s a bit of green. With a church steeple in the background. But it’s tiny – even Google Maps doesn’t mark this area as green to represent a park.

It’s trying to be summer in Rijswijk (Or: Ever-changing weather)

A few weeks back I visited the shopping center In de Bogaard in Rijswijk, a city not far from The Hague. Along the way I took a few photographs of whatever caught my eye. Here are two of my favorites:

The last few weeks have seen weather change hour by hour. Last Sunday we had temperatures in the high 80s (F). And there have been days where it rained more often than not, with a few hours where the skies just opened up and rain came pouring down. A few days of high winds, where you wonder if it might just be possible that you blow away.

This building in the image isn’t far from Rijswijk Centraal, the main train station in the city. It’s been underground since 1996.

Turned upside down (Or: Carnival in Rijswijk, the Netherlands)

A few weeks ago, I met up with Marco in Rijswijk to check out the carnival that was in town (for a few days around March 21ish). We were using a free “pass” we received in the mail from HTM, one of The Hague’s public transportation providers. Once you activate it (at the front of the bus or tram) you can travel for free (for that one day) on HTM buses or trams in the city, or similar. Unlimited trips and transfers.

Of course, Marco’s ddn’t scan properly, but we ended up having no further problems. The bus driver wrote the date on it, but that wasn’t that much proof. (If you get caught without paying the fare for the tram or bus, you get a fine of at least a few hundred euros, I believe. So always best to be careful.)

We also ended up going to Zoetermeer, which is an area just outside of The Hague – but in the opposite direction

Here are some pictures from the carnival…

Overview of the carnival from above. 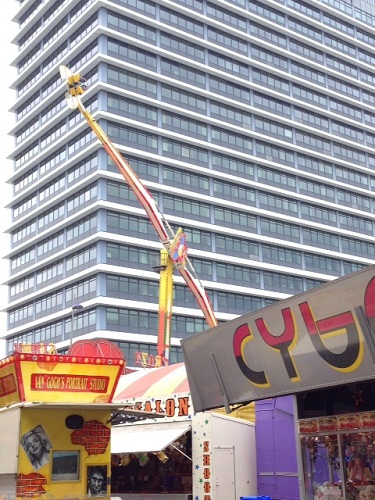 The crazy high flying ride. It was possible to flip your cage as well, if you were (un)lucky. The group we saw as we were leaving was doing that. 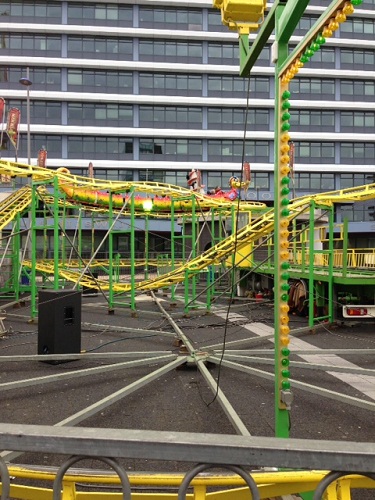 Kiddie coaster. Actually slightly intricate, with the two different levels. Anytime I see coasters like this, I am reminded of a small black dragon one that I went on when I was pretty tiny. It was even simpler than this I think – just one level high, about 6-7 feet tall. I remember screaming for mom a bit when I went over that (now so tiny) hill. ;P 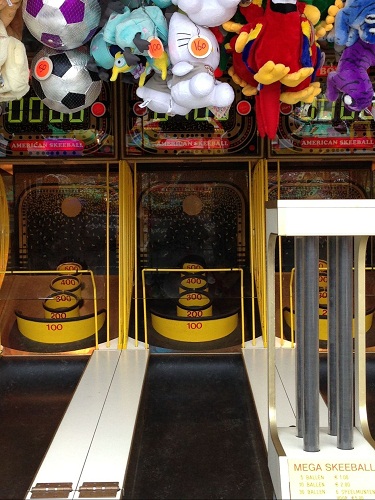 Skeeball! In the Netherlands. Marco was a bit surprised to see this, although he said he hadn’t been to carnivals in some years. (YouTube video – note the different point totals for each hole. The “bucket” section at the bottom gets you the least points. That’s the one where most of the balls fall just because you missed hitting the higher holes.)

A car carousel of sorts. Note the kid wearing a coat. It was windy!

And finally, we have a ride to spin you around some. Needs more Tilt-A-Whirl! (YouTube video – note: there is a wheel in the middle. The faster you turn it, the faster the entire compartment spins around the edges. That’s why some whip around faster than others.)

Swings (Or: Is Central Park safe at night?)

Every now and then I pass a set of swings on the way to work.
I’m reluctant to call it a playground despite that there’s also one of those sort of rocking horses next to it. It’s really nothing more than these swings and that horsey. No grass or anything, just some sort of rubber padding.
But I guess it’s better then nothing.

Niki asked me the other day to be on the look out for picture ops.. So today when I walked past the swings I decided to take a snapshot and share this fun story: Back in 2009 when I was vacationing at Niki’s place, we went to New York (as we often do *grin*)

We ended up at Central Park, entering from Columbus Circle (for those in the know). As we entered this young woman approached us and asked if the park was open at night for joggers. I was somewhat speechless to hear that question. Not something you’d expect her to ask. The park is a large place, I don’t think you want to be running around in it at night by yourself.
Now for some reason I remembered seeing a sign saying it closed at some point of the evening, only allowing people on the main roads. So we sent her off with that knowledge.

Niki and I proceeded into the park itself. It had just rained so that nice smell of wet grass and trees was everywhere. We walked past a playground and Niki wanted to go on the swings! 🙂 Since it had just rained and it was already around 7pm there weren’t any kids there at that moment. So I just sat on the swings (gotta stay cool) while she actually erhmm..well…swung I guess the word would be.
She did warn me that she had to be careful to not do that for too long or she might get sick. And sure, at some point she suddenly stopped before it was too late. It was a very random but fun few minutes there on those swings. A very good memory. It actually reminds me of another story from the same trip but I’m going to have to keep that one for another time.
A hint: It involves bugs.

In motion (Or: Spinning art in Rijswijk)

Marco was able to get some good pictures of a curious looking art installation which was placed in Rijswijk near the Hoogvliet supermarket. I have included both pictures so you can see the motion of both the skaters and of the small ledges they stand on. 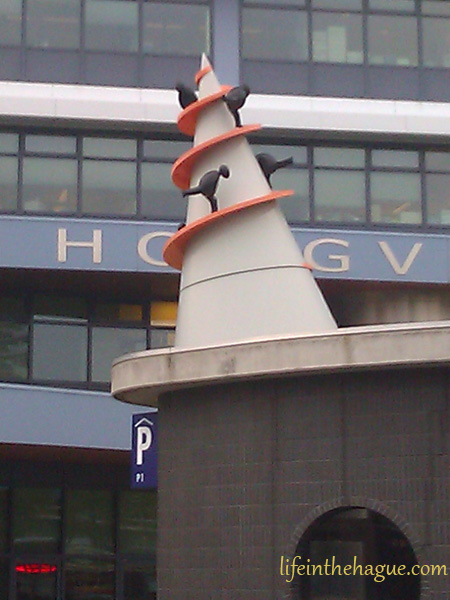 I really have no idea what the art is supposed to symbolize. Maybe it hypnotizes the viewers so that when they enter Hoogvliet they buy more…

Perhaps someone in charge over at Rijswijk read my last post about the fountain being… well, erm… groen (green) and realized a cleaning might be in order.

We shall see. If it holds true to form, it will be back to green within 48 hours of being refilled anyway.

I fear that I will have to zero out my ‘studying Dutch for # straight days‘ counter, as I didn’t officially do anything yesterday. (Well, besides listen to Gers Pardoel and Lange Frans a fair amount.) But the Dutch reading sessions with Marco are going strong, with one on Wednesday, a short one on Thursday, and another scheduled tomorrow.

Just looked up after watching the end of a Mets game and saw the box score. Apparently they have a player with a last name of Nieuwenhuis (~new house) though he was born in California. Interesting.

Heat (Or: Would you jump in this fountain?)

Heat: Two days of soaring high temperatures where frying eggs on the sidewalk is not completely out of the question. Both were 36C+ with temperatures feeling like 40C+ (105F) today.

But only two days’ worth. It breaks tonight, and then the thunderstorm rolls in.   Of course today the bus was a bit late due to an accident around the Lincoln Tunnel, so standing at the bus stop in that kind of heat for 40 minutes was… not fun. (Of course, this is where I have to admit the driver of my bus occasionally reads this blog, so if you stumble across this post Mr. bus driver, I know that you are not to blame! :))

Heat: Here’s hoping the Miami Heat don’t win the NBA championship tonight. I would at least like it to be a series.

Not Heat: Continuing the fountain theme of the last few days, here’s another picture of the fountain at Rijkswijk. Marco took it for me last month. 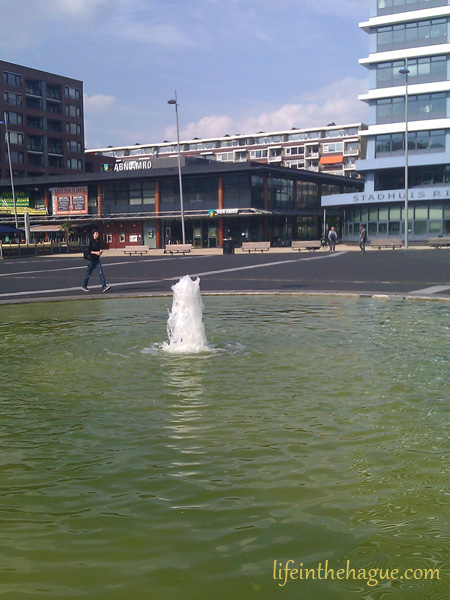 Would you jump into this fountain on a 36C+ day?

The amusing thing about this fountain is they do clean it about a few times a year… and it goes back to green within 2 days of the cleaning. It’s near the Bogaardplein.

Here is another Euro 2012 decoration, straight from Marco’s camera. It’s rather unfortunate that the Google Street view car wasn’t passing by this week, otherwise this larger than life decoration would have been immortalized for all time… or at least 3-4 years. 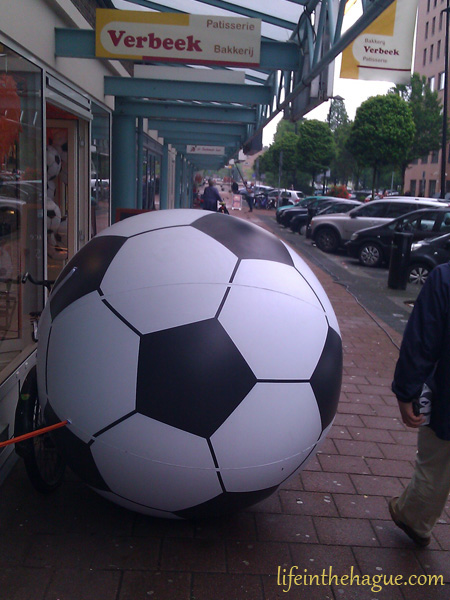 I am not surprised to see that this is nailed down, less someone try to steal it by pushing it down the street. How fast do you think it would take before they get caught? “No, officer. This is my exercise ball, I swear!”

Go ahead. Kick it. I dare you.