Third day (Or: Setting up for Christmas)

This morning Marco and I woke up early (ish!) as we wanted to call IND before the wait times increased. It is 10 cents per minute, so… But when Marco called at 9AM he heard a recorded message that the IND had technical difficulties and to call back later. Long story short, he was able to get a hold of live person after 11AM or so.

As it was the Christmas holidays, the next available appointment was January 11th at 9AM. A bit longer than we had hoped for, but oh well. Apparently since we live in the Hague we don’t need to visit city hall to register there – it is all combined with the IND appointment.

After breakfast Marco and I met up with Roger outside of the Hema, although we first went to Kruidvat (a store like CVS or Walgreens in America) and Xenos, a high end thrift store. Finally, we made a stop at Hema to pick up the Christmas tree that Marco ordered, as well as some extra Christmas ornaments and hooks.

Afterwards we went back to our place (!) to watch some random tv (wrestling and tv shows). At the end, Marco and I started to put the Christmas tree together. We mostly finished it sometime after Roger left for the night, although Marco wants to wait another night before letting me take a picture since he is a bit of a perfectionist about such things it seems. 😉

Second day (Or: Settling in and unpacking)

A pretty uneventful day (sort of). All three of us are definitely under the weather, though Marco has it the worst. But in my case it was probably just from the traveling with heavy luggage and the plane ride that did me in – I wasn’t really feeling it until Saturday when we went to the city.

Marco and I finally dragged ourselves out of bed around 11:30am, after dozing on and off most of the morning from 8:30am onwards. After that, we made some brood met pindakaas (peanut butter toast – yum).

We watched an episode of Seinfeld (American dialogue, Dutch subtitles, as is normal around here for US shows). One of the themes in this episode was the “second spitter” which was a parody of the “second shooter” theory in JFK’s death. I have seen maybe half of the episodes (or less), but I do remember getting a season for my brother all those years ago for Christmas. Afterwards we switched the channel to VH1 classic as I know most of those songs. I haven’t kept up with the modern stuff over the years as radio isn’t as prominent now that we have the internet and I don’t drive/have a car radio.

We also made a to-do list, manually for stuff to get at the Albert Heijn and for miscellaneous stuff to get in the coming weeks (have a key made, get a tram card, etc). We plan on calling the IND tomorrow regarding the next step, as some of the info he has in Dutch conflicts with my info that I received from the NY consulate in English. Not a problem though – it says we have eight days to get it all sorted.

Another fun thing I did was change my personal location on some of the websites I visit frequently. As I lived in Pearl River, NY which was a rather small town, I never really wanted to broadcast where exactly I was. But now I can write that I am an expat in the Hague, since it is a city of half a million people or so. 😉

Other things I was not expecting was CNN to automatically switch to the international edition, etsy.com to only show me items were shippable to NL and have all prices in euros, and Google to switch to the Nederland edition automatically. I at least figured out how to switch Google to the English menu, although it isn’t truthfully needed beyond not realizing that afbeeldingen meant Images in Dutch (versus foto which I am used to seeing).

We also worked on unpacking my luggage and putting it away. Admittedly now one of the drawers under the bed is definitely a “junk drawer” but it works for me for the moment. It is an awesome bed from Ikea with four drawers underneath, two on each side.

At some point later on we are going to go to Albert Heijn and pick up some food and other related toiletries that I will need in the coming days. Thankfully Albert Heijn doesn’t close as early as many stores do (most stores only stay up late on Thursday nights).

Marco also boiled some water for me in his water cooker so that I could have some Pickwick Dutch tea. It was very, very good and helped take some of the soreness and headache away. Two cups!

New furniture (Or: So many big boxes)

Yesterday I went to Ikea with a rental van to go buy several pieces of new furniture.
First order of business was the bed and a mattress. Check! Got those.
Then a new table. Found it.
A new cabinet (type Billy of course) was also on the list. Got it.
And lastly a new piece of furniture to put my tv on (different style than what I have now)
Combined that meant “Lots of trips up the 4 flights of stairs from the car to my apartment. Oy vey.” 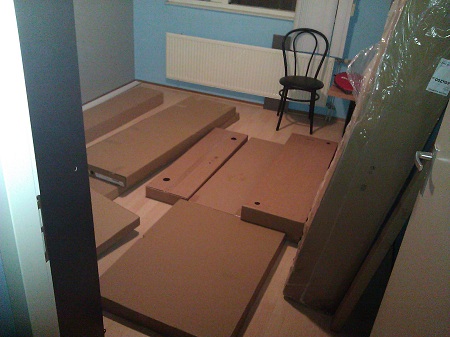 Ikea boxes and mattress in the bedroom

But yay, we survived. Now I’ll put this together over the next few days.
It’ll give me something to do while I count down the hours until Niki and I see one another again..

Ikea trip (Or: It’s all about the pencils)

This evening Roger and I made a quick trip to Ikea to look at the furniture items I wish to buy.
It’s mostly storage space but also a new coffee table. The main thing I need to get is a good bed. Which of course was the only thing they didn’t have in the show room…

Now the thing with Ikea is that it’s hard to not leave without something new in your bag. This time was no different. It wasn’t furniture but I did end up with a few pans. My current ones are pretty old and these new ones were dirt cheap. So yeah, bingo!

Now of course we NEVER leave Ikea empty handed. There’s always a few pencils to take home. Roger gives them to his mom who uses them to write on her crossword puzzles. We behaved ourselves this time and got only about ten of them. Much better than when we were there last year with Niki when we had about 25 between the three of us 😉

Here’s Roger, taking the first one of the night.

And here’s the loot at the end. 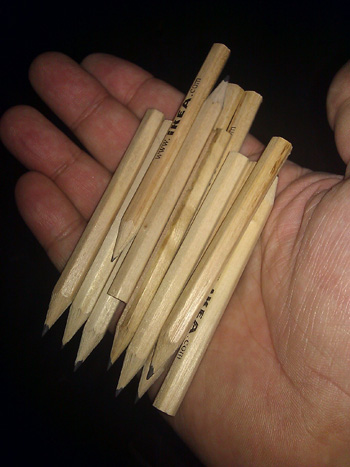 Soon I’ll go back to order/get the actual furniture. We’ll aim for 20 pencils then.

Remotes (Or: Chaos in choices)

One thing that I always found a bit more difficult to grasp is the sheer amount of remotes that Marco has:

Yes, the Xbox controller is also a remote for certain things. I forget what – the last game system I used regularly was Nintendo… However I enjoy watching other people play video games. How is weird is that? Back in the day I loved watching my babysitter play Super Mario Brothers on the original Nintendo (mid to late 80s). I remember how hard it was to make that one jump on level 8-1…

Although in retrospect it shouldn’t be that different from my parents, who also have 5 remotes I believe. I remember having to sheepishly call my mom at work (when I was home briefly for vacation) because I had zero idea had to get the TV set up so I could watch a DVD.

Changes (Or: The dreaded “female touch”)

Niki’s arrival is coming closer and closer. And with that, the changes to my apartment.

My bedroom will be redone (it currently has a one person bed and obviously I’ll need a bit more closet space). But the biggest changes will be in my living room. I will be getting a new pair of couches (the current ones are at the end of their life cycle) which I am totally cool with.
But beyond that..we’re going to have to try my single guy’s room into a couple’s room. As you can see in evidence A below – the picture of my DVD cabinets I have a large collection of movies.And while Niki’s fine with that and is looking forward to watching (some of) them with me, is she okay with adding another one of the huge cabinets, letting it dominate one side of the room? Well, it already dominates one side..but maybe they’ll conquer another wall as well..

Then there’s evidence B. My tv set-up. There’s an xbox, dvd player, blu-ray player and even an old vcr which isn’t even hooked up anymore. (And actually another dvd player that isn’t working/not hooked up)
Not pictured is the stereo that connects my 5.1 sound system.

END_OF_DOCUMENT_TOKEN_TO_BE_REPLACED

Unexpected surprises (Or: Welcome to Holland)

In an earlier post, I detailed the day I arrived in the Netherlands for the first time. But there was one surprise waiting for me that I have not mentioned yet – in fact, it was even a surprise to Marco.

It’s about a ten minute walk from the train station to Marco’s place. When we opened his front door, we were greeted with the image shown above on one of the internal doors in Marco’s place. Unbeknownst to Marco, his mom had used her key to get into his place — not that rare of an occurrence when she needs to drop off stuff, though. She had left some stuff taped up on the door as well as a teddy bear on the bed in his bedroom.

And the blue roses, well… she knows I like blue roses. That is a reference to Tennessee Williams’ play “The Glass Menagerie“, where the main character’s nickname is “Blue Roses”.

All and all, a very sweet and unexpected thing on my first trip.

Apartment news (Or: Inside the new fridge!)

So in other news, Marco’s fridge arrived yesterday. It will take some getting used to having the freezer on the bottom, but otherwise it looks very cool. Unfortunately, it’s a bit too tall to have the microwave on top… but at least this way I can also use the microwave without having to stand on my tiptoes!

END_OF_DOCUMENT_TOKEN_TO_BE_REPLACED

Fridges (Or: The first major purchase)

My fiancé decided to take advantage of the tax free weekend at MediaMarkt. Apparently this weekend (Thursday through Sunday) there are no taxes on most of the items at MediaMarkt. Of course this doesn’t include Apple products!

The fridge in his apartment has been on the fritz lately. My fiancé  decided to hold off purchasing one until after the holidays because of a tax free deal at MediaMarkt — which will save him about 19% in tax. And of course it is a sweet deal because it is increases the size of both the fridge and the freezer drastically. More information about the deal (in Dutch) is available.

And here is the fridge that he ended up buying. Of course he was nice enough to warn them about the two flights of stairs the movers would have to go up…