In case you are wondering, the name comes from the American phrase “Thank God it’s Friday”, which is also often shortened to “T.G.I.F.”.

Marco and I visited the mall last month and we ended the evening with dinner at TGI Fridays. Yum!

As usual the only sticking point was never knowing what language to speak: when we came in, the hostess (person who greets you and takes you to your seat) spoke English. The first waiter spoke Dutch and the second waiter spoke English. Hmmm… That happens a lot, though. Must be something to do with mine American accent (haha). Although I also had the impression that some of the staff only spoke English.

For dessert, Marco and I split warm apple pie with vanilla ice cream, which went well with my coffee. I really enjoyed the ice cream; it was frozen enough that it didn’t melt instantly.

Overall the food was good and I loved the decor. For instance, take a look at the chair in the background of the dessert photo – it’s covered in American flags and other American trinkets. Anywhere else and it would look tacky, but it works here.

Marco also noted at the end that they used an American style “receipt/check book”, which included a slot for a credit card which sticks out over the edge of the book. That way the waiter knows there is a credit card inside when the book is closed. See also this link (Amazon.com).

A day out (Or: Hoog Catharijne mall in Utrecht)

A few weeks ago Marco and I went to Utrecht for half a day. It’s about a 45 minute train ride – when the trains ride properly anyway. There were some issues that day, so I think it took about an hour and a half to get there. Opps! It’s a city in the middle of the Netherlands with about 350,000 residents.

The main reason for this trip was to visit the Hoog Catharijne mall, which has probably been under renovation for years. At least it seemed that way. I don’t think it is completely done, but the parts that are done look really good. Check it out:

And just outside the mall in one of the canals is a piece of art: a whale made of plastic. Of course, a statement on plastic in the oceans.

And a close-up look at the whale from the front:

It’s a nice day trip, especially when you a combine it with a tour of the older parts of the city (which we did a few years back).

Five Guys Burgers and Fries (Or: I am jealous of Utrecht)

Marco had the good luck of being in Utrecht recently, although he wouldn’t describe it as good luck because he was there for work. But he did have the good luck to be able to visit the recently opened Five Guys Burgers and Fries. This American fast food restaurant opened its first location in Arlington, Virginia back in 1986. You can read more about the history of Five Guys.

I think for me the appeal is the simple menu. They mainly sell burgers and fries (duh) with a few hotdogs and sandwiches on the side. Of course they need to have a grilled cheese (tosti) to cater to the Dutch crowd.

Here is the menu in English:

(Did you see that in the milkshakes section they encourage you to add bacon to any shake?)

END_OF_DOCUMENT_TOKEN_TO_BE_REPLACED

Utrecht (Or: Our second try)

Marco and I went to Utrecht on Saturday. We had previously gone to Utrecht last year but we made the mistake of visiting on a Monday — most shops tend to be closed or have reduced opening hours on Mondays. Plus the weather was bad and their was construction around the Domplein so it was not quite what we hoped.

This time it worked out for the better. Marco and I had train ticket vouchers (dag weekend vrij / one weekend day free pass) that needed to be used this past weekend. We first stopped at the VVV office (a tourism office) to pick up a €5 walking tour booklet.

Here are some of the pictures we took along the way:

A statue on the Domplein commemorating WWII. Behind is an image against the side of the wall, but it almost creates the illusion that you are looking inside the church itself.

Actually in the place where the statue currently is you could previously find the nave of the church, but that part of it was destroyed back in the 1600s.

(Above) Also in the Domplein, you have the Pandhof, a garden area dating back to the 14th-15th century (restored in the 18th century).

The Domtoren (towers) – from a bit further away. It rises above the city, and if per chance you are standing in a spot where it can not be seen, more than likely it can be heard. The church bells were all but continuous when we were in the area. 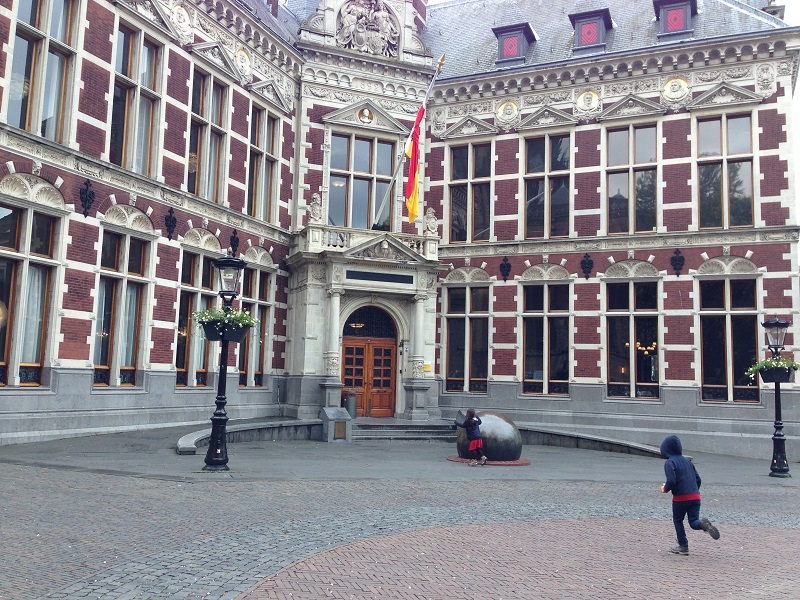 Above you have the main academic building of Utrecht University, built in the late 19th century. 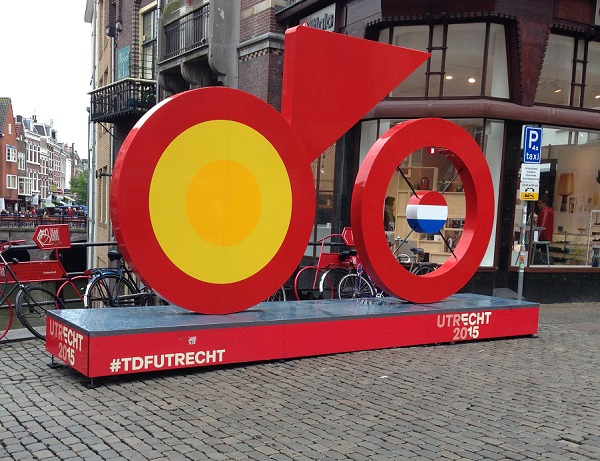 If you didn’t know the Tour de France was starting in Utrecht this year, well, now you do. 🙂 Stage 1 and stage 2 will be held in the city.

And finally, Marco’s favorite joke of the day:

Canals and flowers (Or: Visiting Utrecht)

A few weeks ago Marco and I visited Utrecht. For various reasons it ended up not being quite what I expected but that can be chalked up to two things: the weather wasn’t that great and we went on a Monday, when a lot of things ended up being closed. We mostly stayed in the center of the city and looked at stores (board game stores, comic book stores and similar) rather than doing too many cultural things. I do wish we could have stayed until it got dark, though, as I would have been able to see the Trajectum Lumen. At night certain areas of the city are artistically lit, with guided tours provided on Saturdays.

I did get some good pictures, though. Here are a couple: 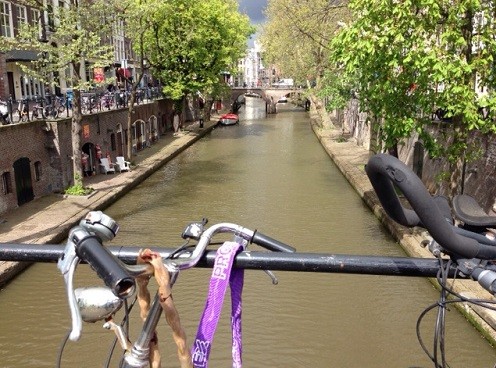 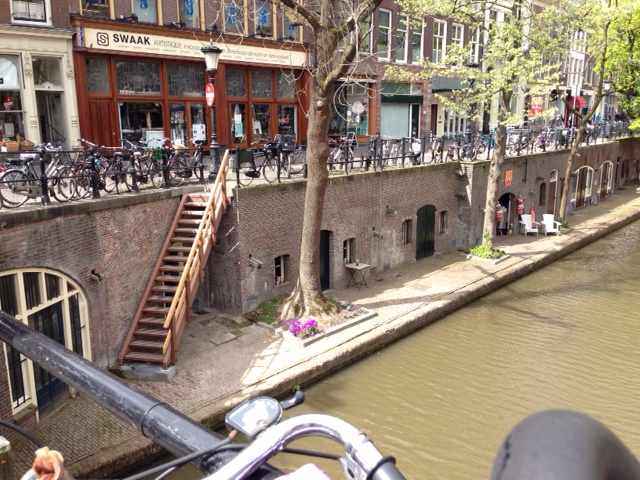 stares down to the canal level on Oudegracht (a main street in the central area). A lot of restaurants are at canal level, so you take the stairs down to reach them. 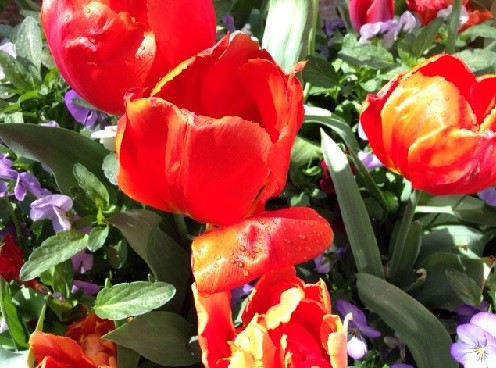 close up of some flowers in Utrecht

“It’s a present” was actually a pretty cool gift shop even though we didn’t buy anything. It had some really random items for sale, including what you see above. The only negative was that the shop was small, so they had to expand vertically – there’s technically three small floors, but sometimes the stairs can be a bit tricky to navigate.