A day out (Or: Hoog Catharijne mall in Utrecht)

A few weeks ago Marco and I went to Utrecht for half a day. It’s about a 45 minute train ride – when the trains ride properly anyway. There were some issues that day, so I think it took about an hour and a half to get there. Opps! It’s a city in the middle of the Netherlands with about 350,000 residents.

The main reason for this trip was to visit the Hoog Catharijne mall, which has probably been under renovation for years. At least it seemed that way. I don’t think it is completely done, but the parts that are done look really good. Check it out:

And just outside the mall in one of the canals is a piece of art: a whale made of plastic. Of course, a statement on plastic in the oceans.

And a close-up look at the whale from the front:

It’s a nice day trip, especially when you a combine it with a tour of the older parts of the city (which we did a few years back).

A few weeks ago Marco and I went to MegaStores. We mainly wanted to visit Woonexpress XL, a furniture store like Ikea where you have one path with different sections of the home along the route. At the end of the path is the storeroom with the larger items seen along the way (like shelving, drawers, etc.) for you to take. Beyond that you have the cash registers and the exit.

And what is MegaStores? It’s basically an indoor mall (a rarity for the Netherlands, unfortunately) full of mostly furniture shops. Marco and I both find it a bit disappointing as having only furniture shops definitely limits its appeal. I’ve only been there a few times myself, with one of those times to buy our two couches from Sanders. Of course, you do have some other generic Dutch stores here (Xenos, Kruidvat, Hema and similar) but since you can find them anywhere, there’s no great need to go here. Except that it is indoors, always a plus during bad weather.

One of the interesting highlights is a wall decoration of “Haagse hopjes”, a coffee candy made in The Hague. They are delicious. You can get them almost anywhere, including the VVV tourist branch in the The Hague public library’s central branch. Or cheaper at places like Xenos, but most tourists do not realize that.

I’ve posted about MegaStores before, with one post about how Dutchies tend to visit furniture stores on Easter Monday or to show the awesome escalator layout (and one VERY ugly rug – seriously, you’ve been warned).

One final thing – MegaStores also has interesting toilet facilities from a company called 2theloo. You can see pictures of some of the toilet stalls at Megastores. Each toilet stall has a different “theme”. Each visit costs €0.60, but keep in mind a lot of toilets in the Netherlands charge at least €0.50 and unless you are eating at a restaurant or some cafés you will have to pay. In this country most toilets are maintained by an outside company.

I haven’t had to use 2theloo, but if I ever do I’ll be sure to write a blog post about it and let you know which “theme” I chose. Haha.

Crib puppies (Or: At the Fox Valley Mall)

One of the places that we visited during our trip to Chicago was the Fox Valley Mall, which is in one of the suburbs.

There is a store to buy… puppies! Of course all of the puppies are showcased in baby cribs. Can’t have it any other way. 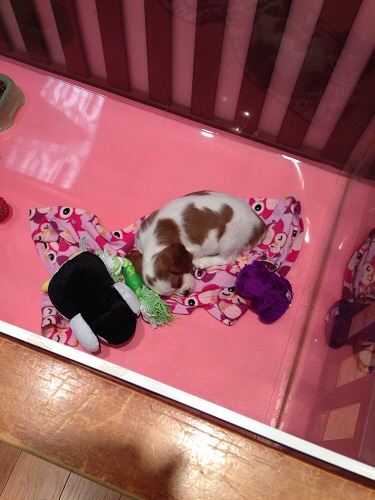 The one big rule is that you do not reach in to pet the puppies – although when we were there, there were two girls who oooh’d and ahhh’d as they reached in. The puppy calmly rolled over and let its belly get scratched. (A few seconds later a worker came over and politely asked them to stop.)

A bundle of cuteness, though who knows how long they have to wait in the crib before being taken back to the backroom and allowed to rest away from the prying gaze of people. I’ve also always found it a bit odd that there isn’t much of a blanket for them to lay on, though I am sure accidents are frequent in this line of business.

But they sure are cute.

And one picture of the mall’s Christmas tree to close things off. 🙂

Saturdays (Or: Megastores and Warung Mini)

Today was a pretty fun-filled Saturday, although I definitely started to drag by the end of it. At 1PM, Marco’s mother dropped by. All three of us went to Megastores in the Hague, which is a larger sized mall. As the temperature has been dropping a bit, it was nice to find that it was an indoor mall. Most of the stores in the mall are furniture stores, although you can also find Dutch staples like Hema, Kruidvat, and Xenos (a thrift store of sorts).

Kind of interesting – this mall uses flat escalators rather than step escalators. It’s a bit of a steeper incline, but otherwise it works.

The first store that we went to was Woon XL, which was an Ikea-like store. Complete with routes to follow (arrows on the floor), various room design displays, pencils to fill out your order card with, a back area to pick up larger items, and a cafeteria at the end. We picked up a nightstand and a medicine cabinet, although we have to figure out how to get the latter up on the bathroom wall.

A crazy looking, huge rug with stuffed animal-like objects stitched onto the top. Good luck finding anything if you drop it in this rug. Seriously… what were they thinking?

Afterwards, the three of us went to a few other stores to look at perspective washing machines and also to McDonald’s to split an order of chicken nuggets. 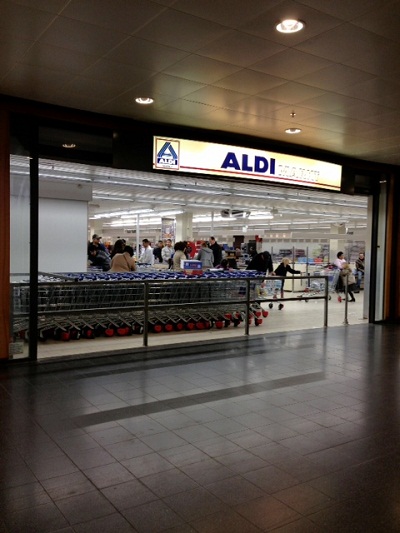 Just for mom – an from-afar look at an Aldi store (since my parents also have Aldi stores near Chicago where they live). You can even see the carts in the front, presumably also requiring a coin to release them. But I am not sure.

By then it was time to go home. As we walked up to the front entrance of our apartment, we spied Roger who had arrived just before us and was waiting in the foyer by the mailboxes. So the four of us went upstairs together.

Today Marco and I went back to the Palisades Center, a four story mall in West Nyack, complete with an ice skating rink, movie theater, IMAX theater, bowling alley, and more.

We decided to get a later start in the day, taking the 1:34 bus. (Poor Roger usually has to deal with me wanting to take the 11:34 bus. Sorry Roger!) We went to a lot of places, including the candy store. Alas, they do not sell the icee spray candy anymore. We also went to the jewelry store to pick up my engagement ring, which had a minor repair done to it. Thankfully it was ready – last week it wasn’t.

Other stores we went to included Hot Topic, Yellow Rat Bastard (a ‘trendy’ clothing store mostly), and Dick Sporting Goods (a new branch just opened in the mall). For lunch we went to TGIFridays, where I had the California Club. Yum!

Continuing the December theme of my last post, one of the places that Roger, Marco and I visited this previous December was Water Tower Place in Chicago. It is an upscale shopping area with eight floors (although each floor is pretty small).

We fell in love with the entrance to the mall:

The three “glass” objects you see on each level are actually formed by cascading water. You can see the pool of water above each of the levels.