As I wrote last week, I had sent Marco 13 greeting cards in the last two months leading up to his birthday.

Well… his response came last night! Happily it came in the middle of one of our videochats, so he got to see me open the package. The highlight was four cards. 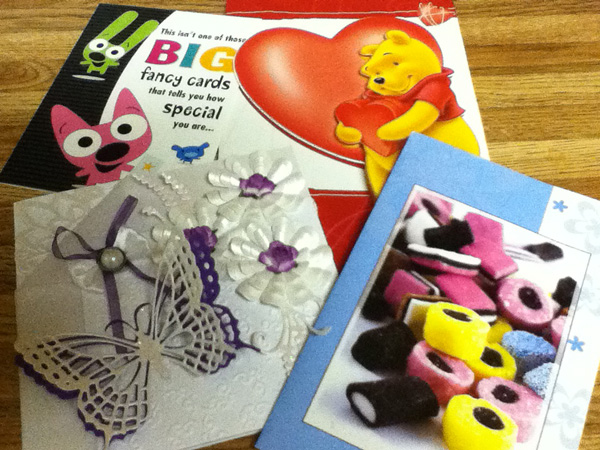 Four cards from random Dutchies… well, not *random*. I do pretend to know them as long as they aren’t acting too crazy… (look’s at Marco’s mom!)

Upper left card: Roger’s card… thanks for the little fancy card that made me feel special. I was very amused by your handwriting while trying to write on a speeding train way too early in the morning. 😉

Upper right card: Marco’s card… apparently he bought it before the first of my seventeen cards arrived. After the third or fourth one arrived, he thought it would look silly to send a card back, so he waited a bit.

Lower right card: Marco’s mom’s card… she definitely knows how to get to my heart. Put anything edible-looking on it and you are good to go! Eten, eten, eten!

Lower left card: Marco’s dad and his wife’s card… yes, that butterfly (vlinder) has 3D wings. Very cool and I had to stop myself from moving the wings up and down. All of the cards are homemade and take a while to complete.

Thank you for the cards, everyone! 🙂 It was an unexpected but welcome surprise.

Those treats should last me the 6 weeks or so before Marco comes back in late September… (ha!)