Flags (Or: Labor Day and hurricanes)

While I was walking to Shoprite I came across flags that had been put up in the downtown area of my town, as today is Labor Day. Mostly people just use the holiday as an excuse to grill and have the day off from work.

The flags you see continue every 15 feet or so throughout the main road in town. If you look on the left side of the picture, you can just barely see an old payphone booth. It was originally a red English payphone booth (complete with a royal crown symbol on top), but it has since been painted black. At the bottom you can see the red paint coming through, however.

Also on the left is The Saloon, which was one of the hardest hit areas for this town during last year’s Hurricane Irene in late August. It just has the bad luck of being in one of the lowest parts of the downtown area, since the road slopes upwards in either direction.

The lower level of the saloon (where the bathrooms and arcade games were) was completely flooded from floor to ceiling. The ground level was also completely damaged.

The saloon ended up being out of business from late August until just before Christmas (hence the Christmas decorations below). Although it was officially open again, the renovations for the lower level were not yet done by that point. 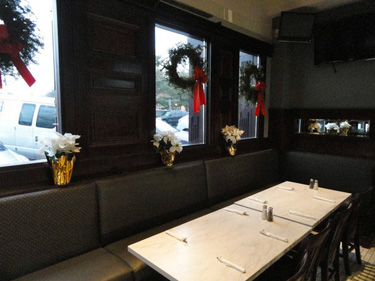 2 thoughts on “Flags (Or: Labor Day and hurricanes)”