My fridge is full of lots of little trinkets, including but not limited to Dutch things.

Above you can see a Delft postcard and magnet (the latter having a 3D element in the upper right that comes out a bit, using a spring). This was from the Summer 2011 trip. You also see my parents’ dog, Oreo. She is a papillon (see below). Kind of big boned for a breed that is supposed to be dainty, but we love her…

There’s a Holland magnet above that which Marco gave me a long time ago. Due to its age, it’s starting to bend a little bit.

In the upper right you can see part of a magnet for the New York Rangers goalie, Henrik Lundqvist (Let’s go Rangers!). It’s actually holding up a business card with information regarding my next dental appointment in late November.

And this is only one corner of the fridge! I plan on taking most of these with (if we find a not-so-garish way to display them) – and if they survive being peeled off. Some don’t respond well to being moved anymore. 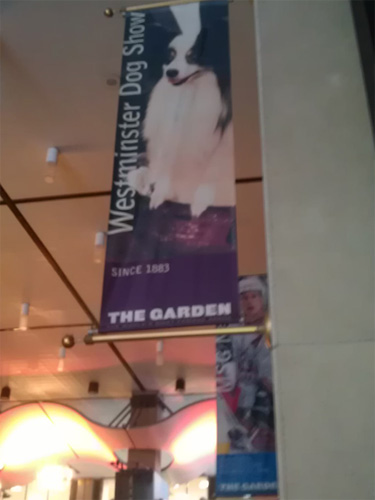 Above is a picture of the Westminster dog show banner in the Madison Square Garden.  It features the papillon “Kirby” which won in 1999. During the dog show (which happens during the hockey season), the ice rink must be melted down. Otherwise the dogs can sense the ice and spend most of their time trying to dig down to get at it!