Countdown to Wednesday (Or: Dutch elections 2017)

On Wednesday the Netherlands will have their parliamentary elections. The primary parties include VVD (liberal), PvDA (labor), PVV (far right), CDA (Christian Democrats) and more — way more. The Netherlands has many choices about who they want to vote for. The parties are so fragmented that no one party can lead – even if you get the majority, you still need to form a coalition with at least one other party to get a government going. Forming a coalition can take up to three months at times! Unfortunately for me I can’t vote – you need to be a Dutch citizen to vote in these elections.

This huge piece of paper is mailed to each household. On the back it lists places to vote:

What makes this election interesting is the inclusion of Geert Wilders, who is more aptly known as “the Dutch Trump”. His party (PVV, of which he is the only official member) advocates for the Netherlands leaving the EU in a sort nexit. He would have the country spend more on defense and less on wind power and foreign aid. He is also very anti-immigration. The Guardian has a very nice article covering the Dutch election and why it is so important – not just for the Netherlands but also for the EU. 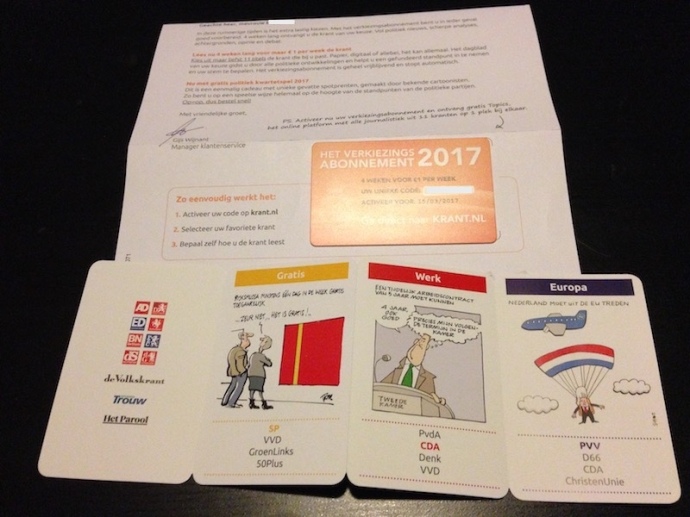 One of the more interesting things to come in the mail was an offer to subscribe to Het Verkiezingsabonnement 2017 or ‘The election subscription 2017’. This is a special newspaper which talks about the issues surrounding the election for only 1 euro per week, with the newspaper running four weeks. You would also get a ‘political card game’ which would help you decide who to vote for based on what your ideals were. For example, in the image above the card at the left has two people talking about how the Rijksmuseum should be free to visit one day each week. If you were interested in that, you would vote for the SP party. And so forth.

Marco and I also received items while simply walking around The Hague:

A flyer about the SP party… and a sponge, of all things.

Flyer for the D66 party (received in the mail)

Wednesday is going to be an interesting day. If you can get out and vote, please do so!

2 thoughts on “Countdown to Wednesday (Or: Dutch elections 2017)”