Tongue-tied (Or: William the Silent statues)

I was digging through my photos from my various trips to the Netherlands and came across more touristy-type photos. I found one that was in reference to William the Silent (just like a previous statue post about him). I have no idea why he was called William the Silent, but internet research (hi Wikipedia!) seems to suggest it was because he never spoke up regarding controversial topics.

statue of William the Silent in the Hague on a horse

I must admit I also like the deep blue window coverings behind the actual statue. Too bad the flowers can’t be that color as well! 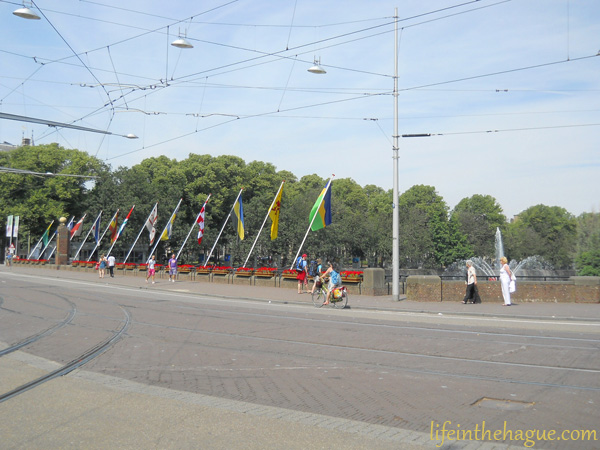 Flags around Binnenhof in the Hague

These are some of the flags that surround the water near the Binnenhof. You’ll notice the red flowers as well. I will admit that the only thing I can think about when I see those is the picture Marco and I were trying to take near those red flowers (though it might have been a different trip).

As I was getting into position to have Marco take a picture, I noticed a huge fat spider was building a web nearby, using the flower pot and the railing to do so. Erk! I think I was a bit of a coward and scooted down to a different flower pot to get my picture taken.

Another shot of the flags surrounding the Binnenhof

And another shot, with the Binnenhof visible in the background. Note also the tram lines at the top of the picture and the tracks in the road itself. There’s also a cool looking, twisting building in the background, behind the flag that is yellow, blue, and red in the middle.

2 thoughts on “Tongue-tied (Or: William the Silent statues)”