Fun fact: 6 years ago yesterday Marco and I met in person for the first time. Oct 19, 2006. We met at UberCon, a gaming convention in the northeast.

In Spring 2007, I went to my third ever UberCon. It was run by the owner of Avatar MUD, the game I have played since I was 14 (yeesh! more than half my life).

At this convention Marco gave me a tattoo, in permanent black marker: 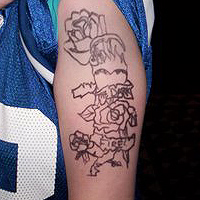 Of course the “tattoo” washed out in about 4-5 days. Thankfully I had shirt sleeves that were long enough to cover it, as back then I worked in the children’s department of a library.

A discerning eye might realize that I was wearing a Colts football jersey at the time. That was because I lost a bet with a friend — I think the Bears lost to the Colts. So yeah, I had to wear the jersey the whole day!

The convention was held the same weekend as my birthday, so I also had a surprise birthday party with a vanilla cake:

One thought on “Birthdays (Or: Black markers and vanilla cakes)”