Shoprite (Or: Grocery shopping after a hurricane)

On Wednesday I went to Shoprite for the first time after the hurricane. I knew it was open because I had passed by it on Tuesday and saw cars in the parking lot. However, I did check in advance just to see what information Shoprite had about store closures due to the hurricane. Looking at it again today, it is much, much shorter list – probably about an extra 45 or 50 stores were reopened since Wednesday.

The main reason I wanted to go was to see what food they had available for actual meals. I have plenty of snacks as I stocked up pretty well on the non-perishable items.

So, the first thing on noticed on the way to Shoprite was that the large tree in front of the church was very much dead. Unfortunately, this had been their crown jewel of Christmas decorations.

It was also a running joke from Marco that when you could use the Christmas tree as a guideline for where the end of the hill was when you had to walk up (I really do live on a steep hill). 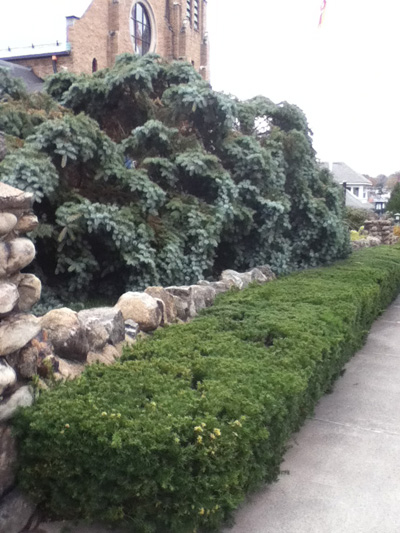 In the downtown area, I was stopped by a gentleman and his older father. They wanted to know where to find coffee – they drove to Pearl River because they knew this town mostly had power.

When I got close to Shoprite, there was a major traffic snarl (well, major for a small-ish town, anyway). After a few moments I realized that was the line for the gas station. As we are so close to the New Jersey border (2 minute drive at most), most of those residents drove here for gas. On Wednesday morning, it was reported that up to 80% of NJ gas stations were unable to sell gas (either having run out or not having power at all). The picture below shows one line (with more cars behind the photo), but there is another entrance. In total I would say about 40 cars were waiting.

The intersection was also hampered by another non-functioning stoplight (flashing red for street the cars were waiting on and flashing yellow for the main road). Took another 4 or 5 minutes to cross, as I had to cross two sides to get to Shoprite.

Within Shoprite itself, the first thing I noticed was the BRIGHT yellow sign on the front door that they did not have any more ice (somehow, people still missed it – the guy in front of me asked if they did).

All of the produce that needs to be kept cool was covered and not for sale. The same thing happened in the orange juice and milk aisle (below).

All of the frozen food was off limits, as they had not yet had time to remove the old stuff and get new shipments in. I heard that this Shoprite was running on generator power, so it was quite likely that they lost power for too long at the height of the storm.

Some of workers were removing some of the perishable items and throwing it into carts to take it away.

In the end, I walked away with two more cans of soup, freshly baked kaiser rolls, and freshly packaged meat. It was very clear what meat items were off limits (covered by plastic or yellow signs put on the doors into the coolers) and what items were available. Basically anything that was packaged in-house was available. I will probably go back tomorrow and pick up some fresh hamburger meat.

2 thoughts on “Shoprite (Or: Grocery shopping after a hurricane)”