La Lanterna (Or: An Italian restaurant in The Hague)

Last night Marco, his mother and I went to La Lanterna in The Hague, for an appetizer, entree, and dessert. His mother and I both had minestrone soup, while Marco went for “inferno soup”, so named for its spiciness. (Helaas [unfortunately], the soup wasn’t an inferno!)

For dinner, I had pizza primavera, with tomato, cheese, ham, salami, mushrooms, and green/red peppers. I just had to take a picture of it because it was so colorful… 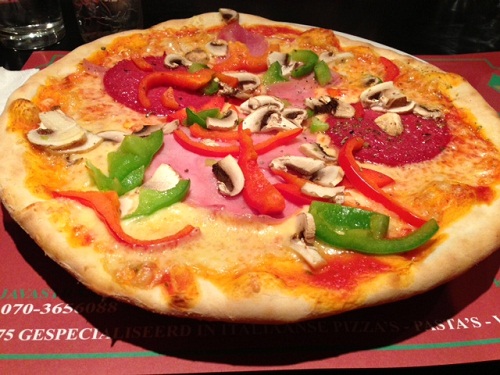 My tastes lean a bit more towards thick pizzas (as I love the dough), but for a thin pizza this was great.

And then there was my dessert:

Yum! So sour. You have before you a lemon which has been hollowed out. They stuffed lemon ice cream inside, placed a bit of whipped cream on top, and then replaced the “top” to make it look like a hat. 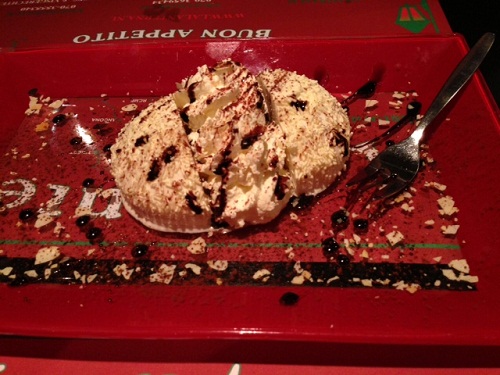 Marco’s dessert. Even before you took a bite, you were definitely drawn in by the plate. The bottom of the plate had a thin layer of glass covering the real bottom of the plate, with a tiny bit of space in between. This caused nifty looking shadows with all of the little pieces they threw around the dessert itself.

All of the dessert portions were big. Of course, I kept scraping on the inside of the lemon searching for more ice cream, but had to stop when I realized I was really just eating the innards of the lemon!

2 thoughts on “La Lanterna (Or: An Italian restaurant in The Hague)”