Exhibition football (Or: The Netherlands vs the United States)

Friday night I went with a small group (Marco, Roger and Roger’s mom) to an exhibition football (soccer) game. The game was between the U.S. and the Netherlands and held at the Amsterdam ArenA. No, the last A is not a typo! 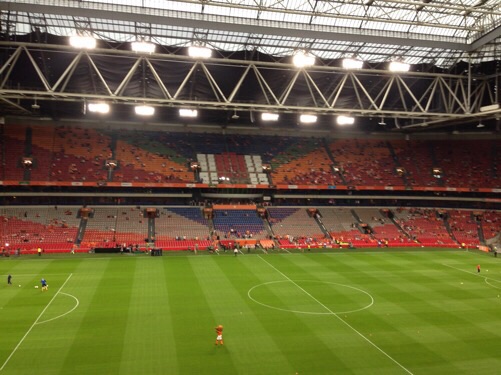 The stands, before most arrived

Orange streamers before the game started

A note about the above picture. It looks like a flyer but if you look very closely you can see lines, each about an inch or an inch and a half apart, where it can be folded. It is a pretty thick cardboard, so when it is folded it becomes a very thin but powerful noisemaker. You smack it against your hand instead of clapping. And there was one at every single seat. Thanks to the stadium’s acoustics it is LOUD. Unfortunately it is nowhere near as powerful outside the stadium!

You can see the football in the bottom right (the white streak) as the Dutch advance. About 2 seconds later they scored to go ahead 2-1.

Speaking of the score, with about 5 minutes to the Dutch were ahead 3-2. And then the Americans scored twice to win the game. With 5 minutes to go…

Marco said it was because the American national team’s coach is from Germany and he was a great forward in the 1990’s. The Germans have a habit for coming back from behind at the end of the game. Regardless, it was definitely a fun experience.

3 thoughts on “Exhibition football (Or: The Netherlands vs the United States)”