The Hague’s newest addition (Or: A statue of “Haagse Harry”)

Marco and I just visited the statue of Haagse Harry (Dutch wikipedia) which was unveiled earlier tonight. The statue can be found above the Grote Markt tram tunnel.

Who is Haagse Harry? A character in a Dutch comic strip who lives in The Hague and speaks The Hague dialect (plat Haags). Here’s an article about the unveiling of the statue (English | Dutch). The author, Marnix Rueb, passed away in 2014. His family used the prize money from a posthumous award, The Hague Culture award, to finance the statue.

If you want to see an example of the Haagse dialect, you can check out this dictionary (a random Google link). The news article about the statue’s unveiling was also written in the dialect. They also translated a good portion of denhaag.nl into Haags in a mirror site (though I don’t know how long that link will work).

There was a contest to determine what the text on the t-shirt would say. It ended up being “Kap Nâh!! Lekker belangrijk”.”Kap Nâh” is “hou op”, or in English “Stop it”. It’s also the name of the first album of strips released. “Lekker belangrijk” is “very important”, but said sarcastically.

And of course, here’s a view from behind. Typically Dutch… 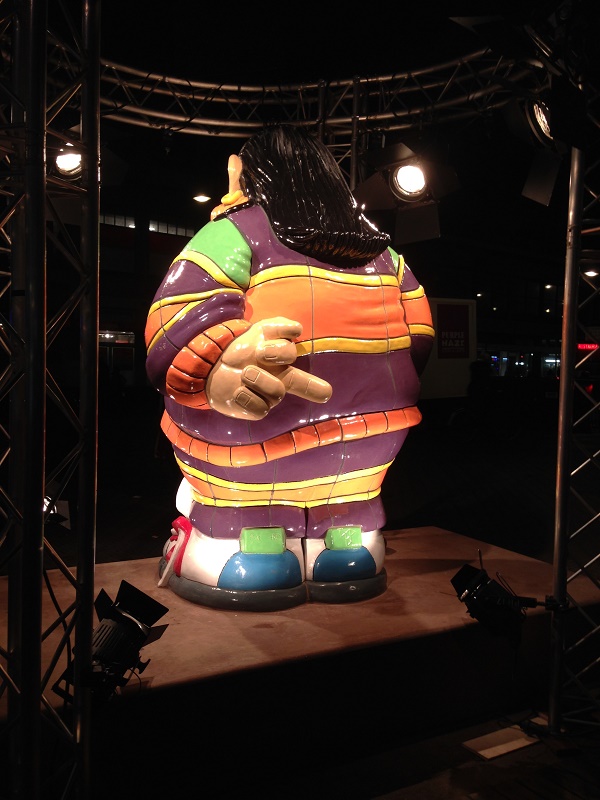