A day to sell all of your stuff (Or: King’s Day)

So last time I talked about King’s Night, which is when you go to music festivals, drink overpriced beer, and dance like a maniac. Oh, and try to avoid being pickpocketed–apparently the police found a 13 year old and 20 year old with a bag full of 21 stolen telephones on King’s Day (article in Dutch over at omroepwest.nl). Sheesh.

In contrast, King’s Day itself is about selling cheap stuff. This is the one day a year it is legal for anyone to sell their old furniture, toys, books, you name it. Well, anything except food. Almost all cities ban that. I didn’t get any photos of these vrijmarkten (free markets) this year, but check out my post from way back in 2012 (!). Back when it was Queen’s Day, before she abdicated the throne and became Princess Beatrix. Marco took those photos for me since I was till living in America back then.

One thing I did get photos of was the flower sale at the Lange Voorhout. It was quite colorful, and not just because of the flowers:

Lots of color here too!

Tonight is the 10th anniversary of The Life I Live festival. Note: their website is definitely experiencing server capacity issues, so it is a bit hit or miss to visit it right now.

The last edition was of course in 2019. It is held in The Hague’s city centre, with musical acts spread out over about 8-10 stages. The opener this year was the Ukrainian band Go_A. Last year they participated in the Eurovision Song festival held in Rotterdam. This year the band got special permission from the Ukrainian government to travel to The Hague to perform (as technically Ukrainian men are not supposed to leave Ukraine right now).

This stage was at the Lange Voorhout not far from the Escher museum and Hotel Des Indes.

This smaller stage was on the opposite end of the Lange Voorhout, featuring the band Kuzko. I didn’t stay long, but they really brought the bass! It was a weird feeling to feel the bass after not going to any concerts the last two years.

King’s Night (and more accurately King’s Day) is a holiday to celebrate the birth of the Dutch King Willem Alexander who turns 55 tomorrow. The joke “Max komt misschien later…” is a joke that Max Verstappen, the 2021 F1 world champion, might stop by here later. Hmm.

(Man, I still remember when it was weird to see Willem Alexander with a beard!)

This coming Wednesday is King’s Day here in the Netherlands, a public holiday for most of us. The larger Dutch cities like The Hague and Amsterdam also have parties to celebrate. The Hague has “The Life I Live” festival (official website in Dutch) traditionally held the evening before, dubbed King’s Night. This free musical festival is held throughout the city centre. This year there are 8 small stages for artists to perform. The Ukrainian band Go_A will open the festival.

I suspect things will get a bit insane Tuesday evening as the event has not been held for the last two years due to corona. The 2019 edition drew 275,000 visitors for those two days (omroepwest.nl, in Dutch), so it will be interesting to see how many we get this year. The local transportation company HTM runs an alternate route due to how congested the city centre gets. (I must admit it is kind of fun to walk down the middle of the street and not worry about cars or trams.) HTM and the national train service will also add extra night buses and trains to help everyone get home at the end of the evening.

But why did I mention orange in this post’s title? Because everyone wears orange, of course! Well, the tourists and the diehard Dutchies do, at any rate. Here is a look at the King’s Day merchandise at Xenos:

Anyone else remember the attempt to rename Koningsdag to Woningsdag for the first year of the pandemic? Woning = home, so it was an attempt to be clever and tell people to be safe and celebrate the holiday from home.

Over the weekend the intercom unexpectedly buzzed. It turned out to be a surprise package from work. Inside were gifts to celebrate King’s Day with.

Think of things like a toxically orange lei (you can just see it hidden behind the orange ballons), nuts, cheese blocks, Valencian orange tonic water, and a game of tic tac toe with wooden blocks. Oh, and an elderberry syrup mixture to stir into your water.

The two drinks were Aperol Spritz, an Italian drink (aperol, sparkling water and prosecco). They actually weren’t part of the package. I still had leftover aperol spritz from last year when I celebrated King’s Day with my coworkers! Virtually, of course. Luckily the bottle is now empty. It’s an okay drink… once a year?

When Marco and I took a walk this afternoon we spotted these flowers by the Hofvijver (English Wikipedia):

Who else remembers that Koningsdag (=King’s Day) was called Woningsdag last year? Woning = home, so it was a play on King’s Day reminding people to celebrate from home due to the pandemic.

Orange sugar (Or: King’s Day in the Netherlands)

King’s Day is next Tuesday which means a lovely day off. That’s about the only advantage these days, since the usual King’s Night parties (the evening before) and the King’s Day market can’t take place this year due to the pandemic. But who am I kidding? I probably haven’t gone to a King’s Night party in the last 5 years (back when it used to be Queen’s Night, before she abdicated and gave the throne to her son).

It also means you see a lot of toxic orange baked goods at the grocery stores.

On the left in the back you have soesjes (profiterole according to the English Wikipedia). Those are pastries filled with cream. In the middle you have tompouce, which is just called tompouce over at the English Wikipedia because it is a Dutch/Belgium pastry. My sweet tooth doesn’t usually show itself so I don’t eat this kind of stuff that often anymore. The best tompouce I ever had was from Hema with a lime flavor, putting it a bit more on the sour spectrum than the sweet spectrum. But tompouces are tricky to eat, more like overstuffed hamburgers. If you bite wrong the cream in the middle squirts out in the back.

On the right you have a schnitte. I had no idea what this was. I told Marco and Roger this and they looked at me a bit incredulously. Apparently its a two or three layer cake with whipped cream between the layers, or sometimes jam. Marco said that Viennetta ice cream (English Wikipedia) could also be an example of an ice cream schnitte.

Viennetta was actually a possibility last week for celebrating my birthday, but we went for cheesecake instead. I will always consider Viennetta a luxury, since that is how I viewed it as a kid. With the commercial where the group would enjoy the ice cream in clear, tall glasses (obligatory YouTube link)…

Aperol Spritz (Or: A drink fit for a king)

As you all know, Monday was King’s Day here in The Netherlands. A day that is typically celebrated by all things orange. And even though this year was a bit more subdued, we still got into the spirit. Pun intended?

During one of my work team meetings last week it was suggested that we do an Aperol Spritz competition in honor of King’s Day, and that we send in our photos. While I did not lift my drink at 16:00 for the Nationale Toost (National toast) yesterday, Marco and I did make the drinks later in the evening.

Note: the recipe calls for a slice of orange as garnish, but you make do with what you have (you can never have too many limes!). Otherwise it is 3 parts prosecco, 2 parts Aperol and one part soda water. And in our case a special King’s Day cookie which I refer to as a “sugar bomb”.

Aperol Spritz is apparently an Italian drink suitable for days when you can sit on the terrace. We’re heading into a very rainy week, so it will have to be an inside drink for the foreseeable future. But at least King’s Day 2020 was celebrated with a touch of orange!

The National Association of King’s Day organizers announced today that Koningsdag (King’s Day) will become Woningsdag (Home Day) this year. Even if you don’t speak Dutch you can see the subtle change in the word to encourage people to stay at home while celebrating Koningsdag.

King’s Day is a day of birthday celebration for King Willem-Alexander who is turning 53 this year. It is a nationally recognized holiday where (most) people don’t need to go in to work. Previously the holiday was known as Koninginnedag or Queen’s Day until Princess Beatrix abdicated the throne in 2013. She also celebrated the day in April, in honor of her mother. Probably a good thing for us as Princess Beatrix was born in late January – brrrr.

Here are some of the activities planned for the Woningsdag later this month:

Kings Day will be celebrated at home this year, with church bells and a toast (dutchnews.nl)

Hmm. Right now a Google search for Woningsdag returns just under 8,000 hits. Let’s see how that increases in the next few weeks…

King’s Night and Day (Or: Carnivals, festivals, and more)

The Netherlands celebrated the five year reign of Willem-Alexander Thursday night and Friday, with King’s Night and King’s Day. I can’t believe it has been that long. I still remember seeing the live, breaking news of Princess Beatrix abdicating the throne (video with English subtitles). I had barely been in the Netherlands a month, and was watching the news without having a clue what she was saying. There are no subtitles on live TV unfortunately…

First, we’ll start with the carnival at the Malieveld which is held every year around this day: 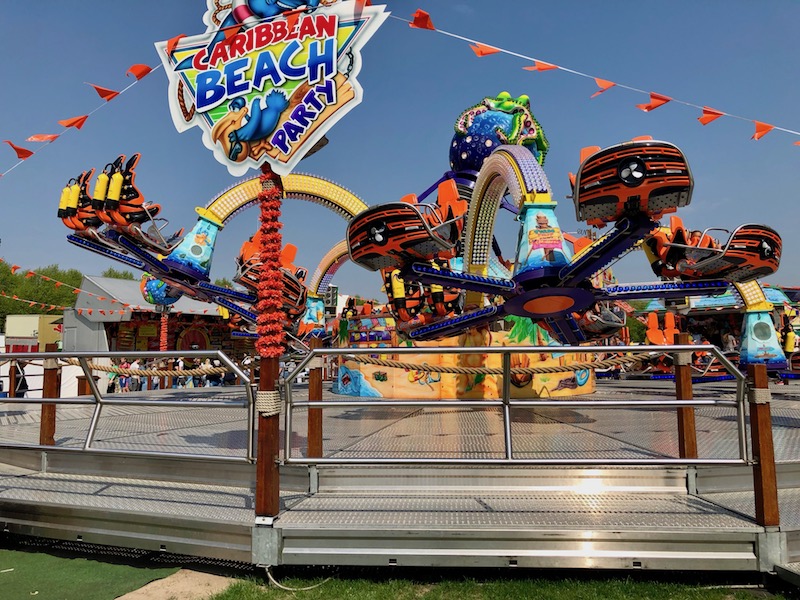 I could probably handle this ride.

Nope. Won’t be going on this one. It was pretty cool to watch though.

And then you had The Life I Live festival in The Hague, held every year on King’s night. A dozen or so music stages are set up throughout the city centre. 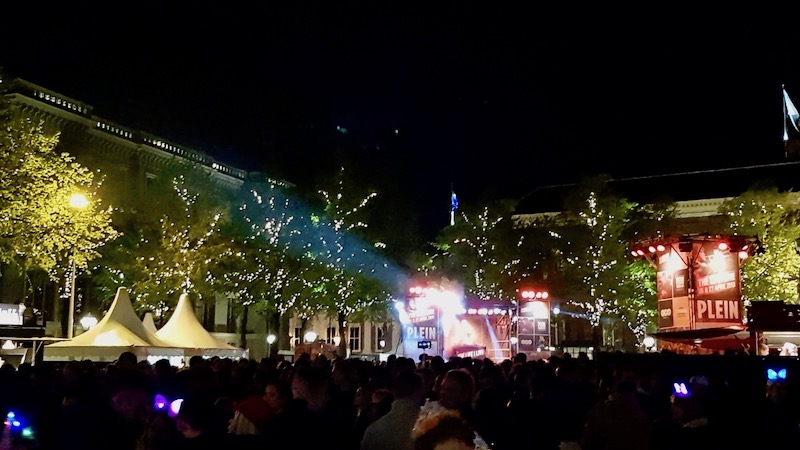 Here is a much larger set up, at Het Plein (literally ‘the plaza’)

The fountain at Het Buitenhof, with the Ferris wheel from the previously mentioned carnival at the Maliveld in the background 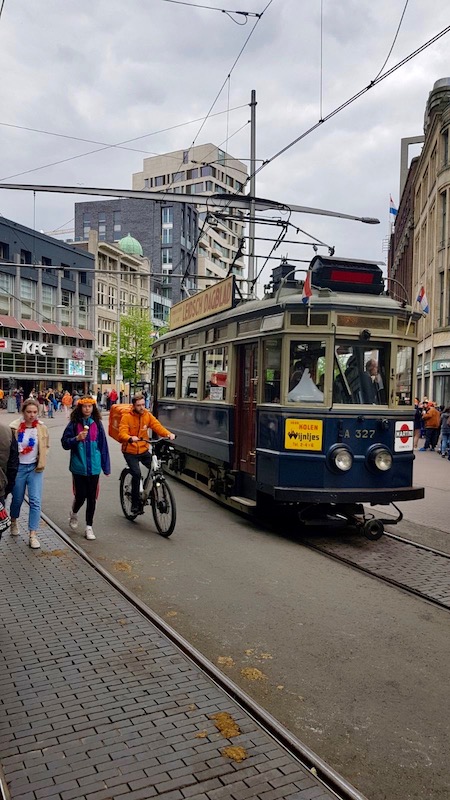 And finally, a historic tram passing by during King’s Day on Friday

I still need to buy something orange for King’s Day. I’ve managed to not do that in the 5+ years I have been here. Related, amusing blog post about orange clothes and King’s Day: The King Size King’s Day T-Shirt blog post over at the Invading Holland blog.

Thursday was King’s Day in the Netherlands, a holiday to celebrate King Willem-Alexander’s birthday. Or to just enjoy a nice day off…

But the real fun happens the night before, as The Hague organises a festival called The Life I Live. I have written a few blog posts about it, including last year’s rainy celebration and the 2013 celebration (back when it was Queen’s night; the last one as Queen Beatrix addicted the throne the next day).

One of the many stages, set up at the Kerkplein (by the Grote Kerk)

Like last year, there was also an area set up for street art. This year’s theme must have been Mondriaan-inspired as there was a lot of primary colors in block formation.

A look at another side, which had just been started: 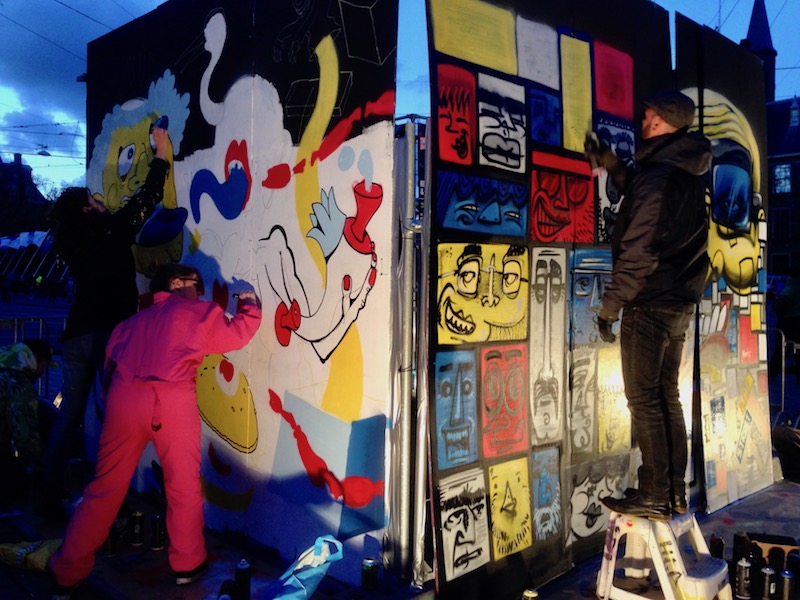 And the last side – Marco’s favorite – a Mondriaan-inspired Transformer!:

Luckily the rain held off this year. It was cold – colder then even Christmas! – but bearable.