Still cold (Or: More photos from the States)

Here are some more photos from the trip Marco, Roger and I took last month! Two last photos from Philadelphia and the rest from New York City (I’ll skip the overly touristy photo of the Liberty Bell in Philly although that was also fun and suprisingly free).

The above sculpture can be found at the intersection of Chestnut and 3rd in Philadelphia.

Artwork in the Lucha Cartel restaurant in Philadelphia

The above might take a bit of explaining! There’s a Mexican restaurant in Philadelphia by the name of Lucha Cartel. It’s actually in Old City on the east side of Philly. It is a reference to luchadors, who are masked Mexican wrestlers. It was very close to our hotel. And you guessed it – the artwork is actually many skate boards placed next to each other. It was a great restaurant (both food and theming) and I highly recommend it.

And now on to New York City…

END_OF_DOCUMENT_TOKEN_TO_BE_REPLACED

It’s been a while since I’ve done a puzzle (although ironically I received a new one as a gift last week!) but this one is near and dear to my heart. As some of you know, I like trams and metros and subways and…

So it should come as no surprise that the puzzle above – a map of the New York City subway – is so awesome!

I bought it when Marco and I were in New York City earlier this summer – purchased at the New York Transit Museum store at Grand Central station. It is made by New York Puzzle Company. 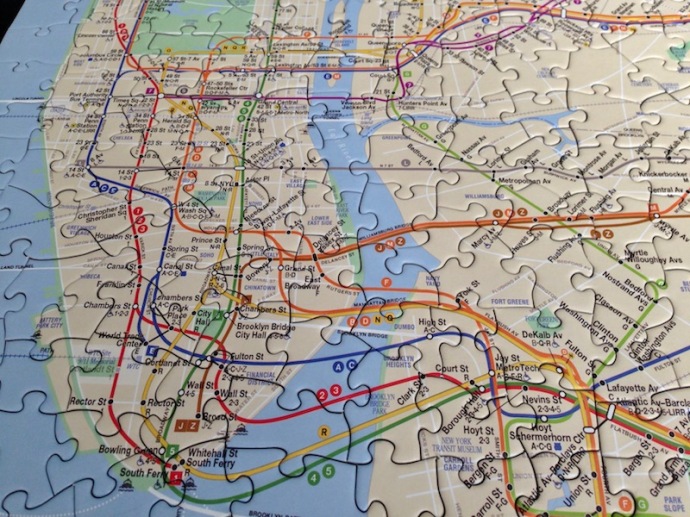 Unfortunately it is only 500 pieces (I am more a fan of 1,000 pieces), however admittedly it does fit on the coffee table better… but due to its smaller size it took only 2-3 nights to complete.

I can’t say that I won’t be lost anymore in the subway, but at least it is fun to see how everything connects together!

Who knew that part of the subway runs under Central Park?

Vacation photos (Or: The beauty in Central Park)

Here are some of my favourite photos from Central Park…

My favourite photo – the calmness of the park, with the city just behind

Marco and I slowly crossed this field. At this point we saw a sign, which we read and then turned around. We had no idea this view was behind us!

END_OF_DOCUMENT_TOKEN_TO_BE_REPLACED

Continuing the trend of “things that remind me of home while visiting America”, Marco and I were in a drug/convenience store by the name of Duane Reade when we spotted some Lotus cookies. Except in America it looks like they are known as “Biscoff” cookies. 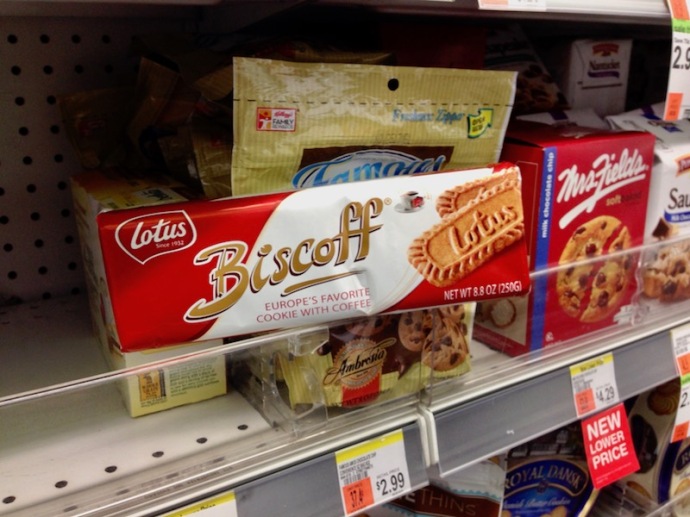 They are pretty good with coffee – fairly light, fairly small, so one is just right.

Hi all! I’ve been gone for a while, as Marco and I were in America (three days in New York City as tourists and a week in Indianapolis with my parents). And now we’re back! And to begin with I have a few posts of things that remind me of home, to some degree.

The first is a Belgian waffle stand in Bryant Park, Wafels & Dinges (translates to Waffles and Things). Actually, they have a lot of locations throughout New York City. Here’s a look at the side of the stand:

It’s our favourite dinges made from traditional Belgian gingerbread cookies. In places like Dadizele, Zwevezele, and Erps-Kwerps, Belgians spread this dinges on waffles, pancakes or as the sandwich spread (“to spekulate”).

Some people we know also eat it by the spoon (“to overspekulate”).” Heh.

END_OF_DOCUMENT_TOKEN_TO_BE_REPLACED

Last week Roger dropped off one of his mother’s puzzles for me to work on. Little did I know, it was 1000 pieces! (I thought it would be 500.)

It is a Jan van Haasteren puzzle with the title NY Marathon – he is a well-known Dutch cartoonist. Part of the reason I like his puzzles is the fact that they are animated – it reminds me of a puzzle I had when I was younger (probably 500 pieces) with a mini golf theme. 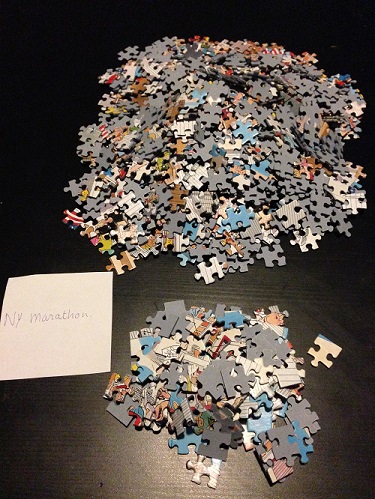 I had a small scare at one point when I couldn’t find one of the edge pieces (remember, it’s not my puzzle!) but after a while it turned up. The biggest issue is the lack of table space – hence why I don’t have any puzzles of my own and it is better to borrow one from someone else.

Progress is being made… 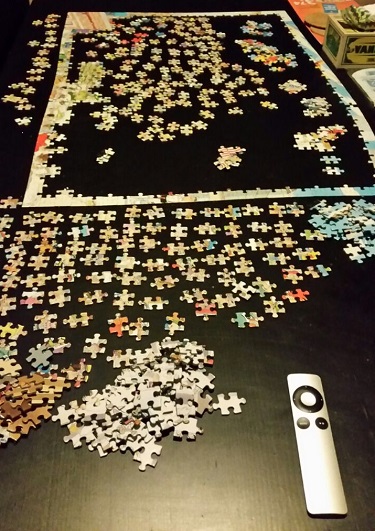 But still a long, long way to go.

Tenth day (Or: Something for my dad)

Here’s a quick look back at the brief weekend trip the three of us took to New York City right before we returned to the Netherlands. One thing we stumbled on was A Christmas Story musical, which is the movie I mentioned on Monday after Roger got me the DVD. Dad and I used to watch it every Christmas, as it was on a 24 hour marathon on the TBS channel…

Notice the lampshade in the second image. ;p Marco and I had a quieter day today. Earlier in the afternoon we went to a few different department stores so I would have an idea of what they sell, although mostly what they sell right now is winter clothes and jackets which isn’t what I am looking for.

We also took advantage of the late shopping hours that occur in the Hague on Thursday nights and went to pick up groceries for a late dinner. Afterwards, we enjoyed a glass of white beer (Korenwolf brand) while watching the Incredible Hulk. Another movie to catch me up to Marco’s geekiness. ;p Slowly but surely… but I wouldn’t be too worried until I start reading his comics!

Continuing the tree theme of the previous post, I also took a few pictures of various decorated trees in New York City.

The first photo was from a distance as I had to get to the consulate. But it is the Macy’s Christmas tree at the main entrance. The “yellow blob” is actually the word “Believe”, which could be seen in the Macy’s parade for Thanksgiving Day.

Taking this picture when I went to the consulate also helped out last Friday, since I popped out of the subway on the other side of this street. But as I saw the Macy’s decorations to the left of me, I knew to go left down to the street to get back to Penn Station.

The second tree was on 39th street and 3rd. There were actually 4 lighted trees, although I was only able to photograph one of them.

The morning itself was dreary…as you can tell from the wet roads. Drizzling on and off most of the morning.

Another good tree to see is the one in Bryant Park, with blue lights. But that is another day. And of course the tree in Rockefeller Center…

Lower Manhattan (Or: On my way to Penn Station)

So on Friday I went into New York City to pick up my Dutchies from the Penn Station, as their flight was coming in from JFK. I ended up hitching a ride with a coworker who goes into the city every weekend to take care of her mother-in-law.  We left home for the city at 5PM.

The interesting thing was we made it into the city fairly quickly – maybe a half hour or so. But we ended the city via the George Washington Bridge, so near 180th street or so. But as we needed to get to Chinatown (near the southern tip of Manhattan) we had a-ways to go on the Henry Hudson Parkway. The traffic was definitely the heaviest near the top of Manhattan, but the views of the Hudson river and New Jersey on the other side at night were spectacular. (For that matter, George Washington Bridge also looked pretty when lit up.)

After about 90th street or so, the traffic eased up slightly. By the time we got to 34th street, traffic had begun to move at a mostly steady clip, only slowing down for the various exits. Although I was headed for 34th street & 7th avenue, it is too much of a pain for her to exit at that point when she really needed to go to Chinatown instead. So she ended up exiting on Canal Street and heading east to Chinatown, letting me off at 5th avenue.

After about 5 or so minutes getting my bearings, I began to walk north through the named streets (not even at 2nd street yet). When I hit 4th street, I found my way blocked by the Washington Square park, so I decided to cut across it rather than going around. I did get a nice picture of the Christmas tree there, from a distance: 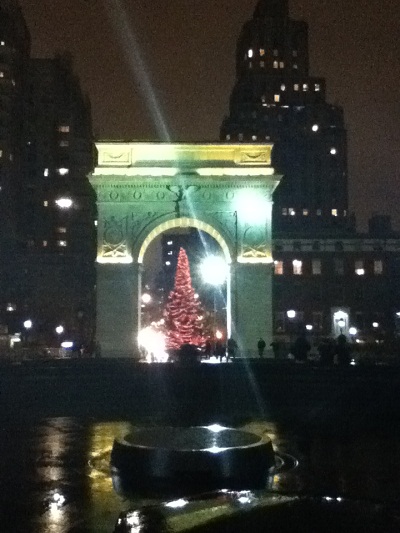 I kept walking north until 14th street, before I headed west to 6th avenue. I took the F/M orange line to 34th street, and then walked west to Penn Station. (All of those Rangers games over the years definitely helped me get my bearings! Thanks Roger! ♥)

After that, it was just a matter of waiting around in the NJTransit area for about 10 minutes before the Dutchies arrived. Just in time too – we had about 6 minutes to get the next train. This was the last train to get before we would have had to wait an hour at the transfer point. But we made it!

Fridays (Or: The Dutchies arrive…)

It seems like only yesterday since I saw Marco (early October), but he and Roger are returning again today! I suppose that’s the benefit of scheduling uneven breaks between trips: April to October, and then October to December.

But it is a break from routine in some respects: they have to fly into JFK on Aer Lingus rather than into Newark on Delta, so that I could secure a one way ticket to the Netherlands on an Aer Lingus flight. That airline sells cheapish one way tickets. Unfortunately this means landing at 6:20PM or so rather than 1 in the afternoon. No more getting back home by 5PM!

Because of this, we’ll be meeting at Penn Station as it seems a good not-quite-halfway point for all of us. I was able to get a ride into the city with a coworker, so I don’t have to battle the crazy bus traffic that crops up on a Friday afternoon.

Regardless of when we get back home, it’ll be fun to be back in the company of the Dutchies again. Even if my apartment is more of a mess than it usually is when they arrive…