Still cold (Or: More photos from the States)

Here are some more photos from the trip Marco, Roger and I took last month! Two last photos from Philadelphia and the rest from New York City (I’ll skip the overly touristy photo of the Liberty Bell in Philly although that was also fun and suprisingly free).

The above sculpture can be found at the intersection of Chestnut and 3rd in Philadelphia.

Artwork in the Lucha Cartel restaurant in Philadelphia

The above might take a bit of explaining! There’s a Mexican restaurant in Philadelphia by the name of Lucha Cartel. It’s actually in Old City on the east side of Philly. It is a reference to luchadors, who are masked Mexican wrestlers. It was very close to our hotel. And you guessed it – the artwork is actually many skate boards placed next to each other. It was a great restaurant (both food and theming) and I highly recommend it.

And now on to New York City…

END_OF_DOCUMENT_TOKEN_TO_BE_REPLACED

Off to the States (Or: One cold but cool vacation)

Marco, Roger and I returned last week from a vacation to Philadelphia and New York City. It was cold! Though we noticed that it was just as cold in the Netherlands when we returned last Tuesday.

The first part of the trip was being tourists in Philadelphia. It was also interesting because it was the first time Marco and I stayed at an Airbnb (Roger had experience during a trip last year). It worked out well, but I am not sure how I would feel about sharing an apartment with a stranger. Since there were three of us and we needed two bedrooms this was not an issue during our trip.

We ended up staying in the area of Rittenhouse Square (above). This was taken the night we arrived, so we were basically walking around trying to stay awake.

“Spirit of transportation” mural at 30th street station in Philadelphia

Above is artwork in the 30th street station. We ended up here because we flew to Newark, NJ and then took a train to Philadelphia for the first part of our trip.

Here’s where I admit I have never seen the Rocky movies (and have no interest in doing so). But still, when you are in Philadelphia it is pretty much a requirement to take a picture of the steps made famous by the movie. The building itself is the Philadelphia Art museum. The city erected a statue in honor of Rocky off to the right, just out of view of this photo. 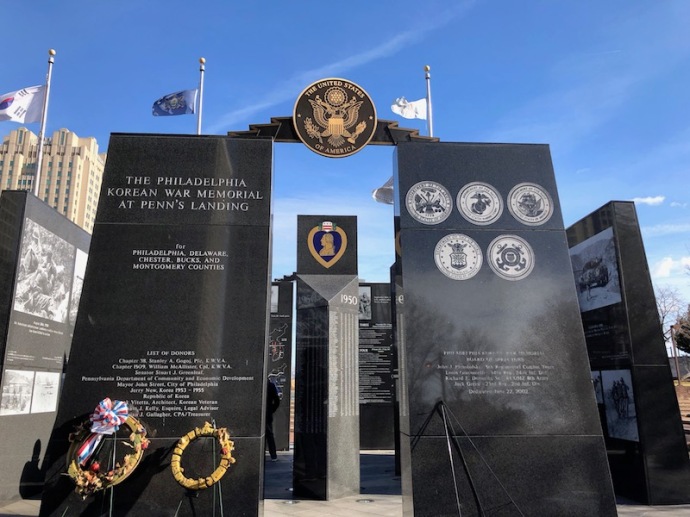 Over on the east side of the city (with Camden, NJ just on the other side of the river!) we visited the Korean War Memorial (above).