WordPress stats (Or: All things are relative)

One of the things that WordPress has added is a breakdown of your views based on the visitor’s country. This is only on the new stats page, not the Dashboard page – which makes sense since the Dashboard page is going to go the way of the dodo bird very soon.

Needless to say, I was pretty excited by this change. It’s good to see that my blog is being visited first and foremost by Dutchies – it warms my heart to see this even though I am not even yet a fledgling expat. In the fall I told Marco that since I was moving there that I would start a blog. I joked that he should get me a domain name redirect for Christmas so that the site wasn’t just lifeinthehague.wordpress.com. At the time it was just to hold the name and I would start the blog later. Except that’s not quite what happened…

In the chaos of unexpectedly getting an engagement ring on Christmas morning instead (yay!) we forgot to setup the domain until January 6. I posted the first post the next day. Aptly that post had a picture of a street sign in it, representing (to me) moving and decisions and multiple paths towards a new life.

…Okay, okay, I also picked it because it had “bibliotheek” or library on the sign. You got me! 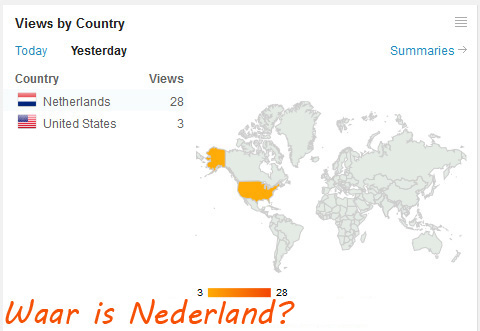 Here today, gone tomorrow. Where did the Netherlands go? 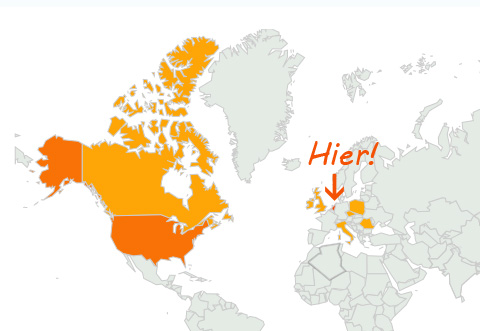 A larger map on the summaries page does show the Netherlands

However, if you click the Summaries link on the first image you will see a larger map which does (barely) manage to get the Netherlands on to it. So I guess it does exist after all. You just have to know what you are looking for — and squint a bit.

But still, stats by country has been a wonderful addition. I’ll admit it’s a bit weird to start a blog 12 months before I move, but I am sure things will heat up quickly!

4 thoughts on “WordPress stats (Or: All things are relative)”