Friday movies (Or: Tornadoes and transitions)

So tonight I was happy to find that the movie Twister was on TBS. A perfect movie to relax to on a Friday night. All I can think about when watching this movie is my time as an undergraduate college student: it would rile up the meteorology students so much if you even mentioned this movie, due to it being so inaccurate. (I just remember them talking about exactly what happens to your body if you are inside a F5 tornado, tied down or not…)

Things about this movie:

1.) It is amazing how many tornadoes hit Kansas in such a short time span.

2.) The dog lives. That is all that matters. Of course, people were saying the Independence Day movie would have been a better movie if the dog hadn’t avoided the fireball of death. It did look a bit unrealistic, of course.

3.) Remind me never to visit Kansas.

And then I am reminded of one morning shortly after I started the job I hold now in southeastern New York. I was almost to the library’s front door, ready to head into work, when I heard the sirens go off. I instantly froze in confusion (and a bit of ingrained fear). You see, I am from the suburbs of Chicago… and that exact same siren is used as a tornado warning. But it was a bright day with cheery blue skies… I asked someone and they explained that it is used for firefighting calls around here, not tornadoes, since it is a volunteer firefighting system. I’ve since gotten used to it, but it was that moment of transition that got to me.

On the subject of transitions, another blogger is less than 2 weeks out from moving to the Netherlands. She noted that she felt a bit sad that she came across milk that had an expiration date that was after her move. I admit, when this happened to me, I only felt excitement… 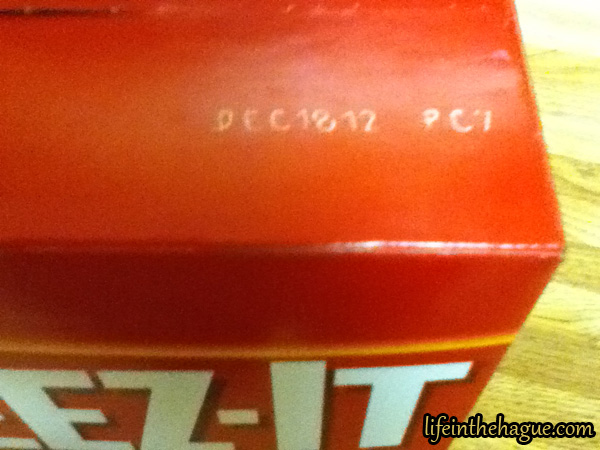 December 18, 2012, the proposed date of our flight to the Netherlands.

Imagine my surprise to see a Cheez-it box with the same expiration date as our flight (this was about a month ago).

Of course, with my still being 5 months out, it’s entirely plausible that the shock hasn’t hit yet.  I am sure there will be some sadness at some point. But right now it hasn’t really hit yet. The only thing I feel sad about is leaving my job and coworkers. I do find it a bit frustrating when people ask questions I can’t answer (Why do expats still pay taxes to the US? What if you don’t have a job in the Netherlands?) but they are always good questions I should be thinking about. I just haven’t spent the time – yet – to figure out the answers for the nitty gritty details yet. I know there are forms I need to get ready (including the things that need an apostille) but as they have a 6 month expiration I put off figuring out how to get those for now. Still a bit too far out.)

But it feels like yesterday was ‘6 months to go’. It’s crazy sometimes.

4 thoughts on “Friday movies (Or: Tornadoes and transitions)”