Earlier today I was doing some work for Avatar MUD (closing loopholes people were abusing – what else is new!), and I had Chopped Grill Masters on my TV as background noise. On Chopped, four different chefs compete each week to see who is the best. There are three rounds: appetizers, entrees, and desserts. One chef is eliminated each round. Grill Masters is a special version of that, with 4 episodes – 16 chefs competing for a spot on the finale (the 5th and final episode).

Anyway, at one point I thought I heard something, but I wasn’t sure. I glanced up from my work and listened. It was as I thought – one of the required appetizer ingredients was speculoos! 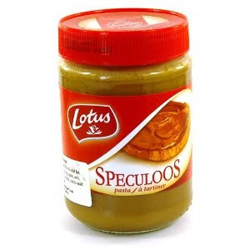 Speculoos (speculoospasta) is basically a paste made from speculaas cookies, both Dutch treats. According to Marco it was first marketed in 2007. Thankfully Marco had recently mailed me another two boxes of speculaas cookies for my coworkers and I, so I have enough to last for now.

So yes, I saw something Dutch (or Flemish, or Belgian…) on my TV today. Pretty cool.