Continuing the tree theme of the previous post, I also took a few pictures of various decorated trees in New York City.

The first photo was from a distance as I had to get to the consulate. But it is the Macy’s Christmas tree at the main entrance. The “yellow blob” is actually the word “Believe”, which could be seen in the Macy’s parade for Thanksgiving Day. 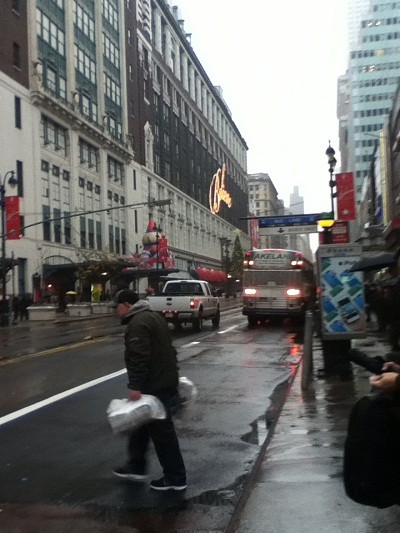 Taking this picture when I went to the consulate also helped out last Friday, since I popped out of the subway on the other side of this street. But as I saw the Macy’s decorations to the left of me, I knew to go left down to the street to get back to Penn Station.

The second tree was on 39th street and 3rd. There were actually 4 lighted trees, although I was only able to photograph one of them.

The morning itself was dreary…as you can tell from the wet roads. Drizzling on and off most of the morning.

Another good tree to see is the one in Bryant Park, with blue lights. But that is another day. And of course the tree in Rockefeller Center…