A magical place (Or: Disneyland Paris)

Above: Tower of Terror ride as seen from Toyland (aka Toy Story – you can see the green army man overlooking a ride).

Marco and I have been here for a few days now. It’s been pretty cool, especially as I have crossed the two most worrisome rides off my list – Thunder Mountain and the Tower of Terror.

Thunder Mountain wasn’t horrible and there is a chance I would do it again. The ride has three fast sections (including some spots in pitch black) and a few slow down moments. I survived.

Tower of Terror wasn’t quite what I remembered – the story bit after you are in the ride was only about 45 seconds and then they started to drop you. Two or so floors at first, and then rushed back up again for four or five floors. The ‘finale’ was about 160 feet (12 or so floors) back to back – two drops. They open the doors at the top so you can look over the park briefly. Of course my eyes were closed and my face buried in Marco’s arm so I only saw a brief glimmer of sunlight against my eyelids. The one in Disney World has a bit more story to it, and the chance to be dropped a random amount of times (2-4?). I won’t be doing this one again. 😛

Yesterday we hit a lot of tv smaller rides in the park including ‘It’s a small world’. It’s more bearable during the Christmas season as it is half Christmas music and half ‘It’s a small world’ music.
We also rode the tram around the Disney Parks, though it wasn’t quite what Marco remembered – there was not much stuff to look at. Unfortunately we missed the ‘Behind the Magic’ tram your for Disney studios as it was only open Monday and Tuesday and we didn’t realize. They do publish the scheduled closings months ahead of time, so that is nice. There’s also a few things that are only open Thursday and Friday, like an ‘Armageddon’ (the movie) special effects show. 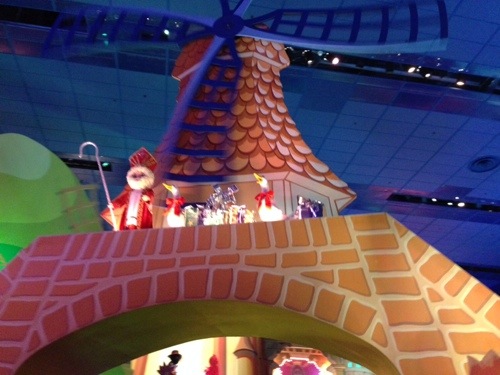 Above: Dutch Sinterklaas in ‘It’s a small world’.