Cinnamon (Or: Frozen pretzels at Shoprite)

One of the random snacks that I enjoyed as a kid was a soft pretzel which you put in the microwave for 30 seconds. They come frozen. You get six in a box, as well as a bag of pretzel salt which is a bit thicker than regular table salt. I think you are supposed to wet the pretzel a bit to help it stick. (The most amusing thing is the warning not to use the entire salt packet for one pretzel, as it’s enough for six.) But I just dump a bit of table salt on a plate and duck a bit of pretzel into it. Sometimes I dunk the pretzel in mustard.

I had mentioned to Marco a few weeks ago that I had found these things again. Recently he mentioned wanting to try them with cinnamon, which I thought was… interesting. I really couldn’t envision it.

Well, I forgot that I live in America. If you want a flavor, they’ve probably already thought of it and manufactured it for you. 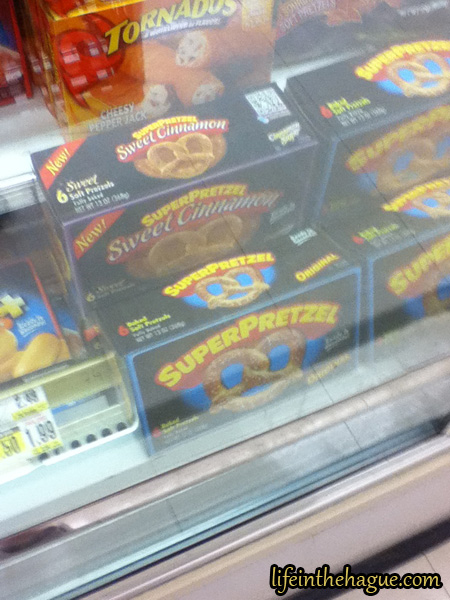 During today’s trip to Shoprite I looked at the frozen pretzels and realized that they had a cinnamon flavor. Crazy! I didn’t pick up a box yet, but I will before Marco comes. I’ll report back if it’s decent or not…

5 thoughts on “Cinnamon (Or: Frozen pretzels at Shoprite)”