Last days of summer (Or: A walk through the Haagse Bos and Benoordenhout)

A few weeks ago – the last decent warm day, really – Marco and I took a walk from Central Station through the Haagse Bos (The Hague forest) towards Benoordenhout, a district of The Hague.

Monument to Emma, Queen consort of the Netherlands

Above is a monument to Emma of Waldeck and Pyrmont, the mother of Queen Wilhema. After the death of her husband, King Willem III, Emma became the Queen Consort of the Netherlands in 1890. This lasted until 1898 when Wilhema came of age.

(Huh. There’s a tram stop/street called Waldeck Pyrmontkade. And now I know why.)

Above is a building for the scouting group Scouting Stanley 55. 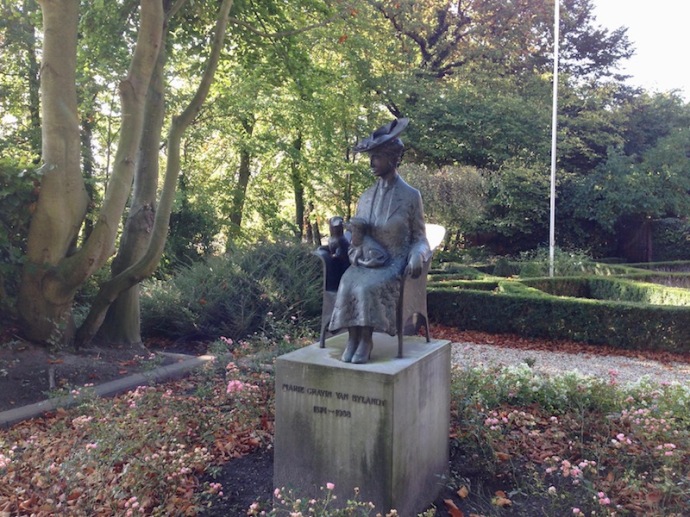 It is a bit hard to tell in this photo but the woman is holding a dog in her lap. This is Maria Gravin van Bylandt, whose organization promotes projects which help people as well as animals. 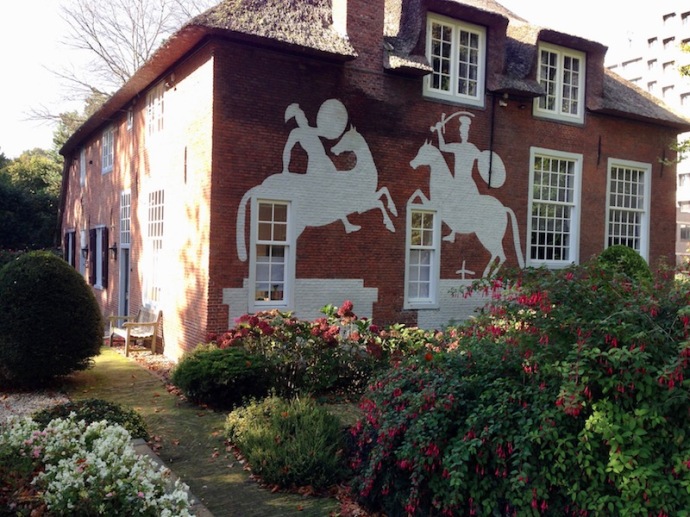 And the last photo is of an Albert Heijn (local supermarket) which still has the older, golden logo. Cool!

Just around the corner (Or: Jewish monument in the city centre)

If you take the stairs underground near the entrance to the C&A department store on the Grote Marktstraat, you’ll find a Jewish monument: 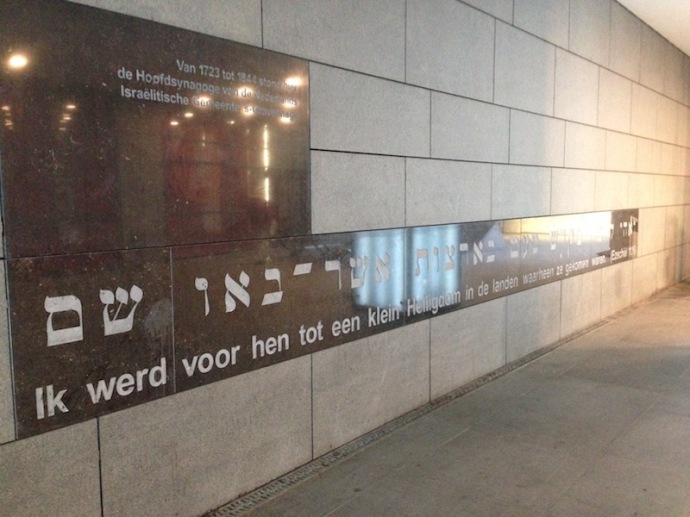 Ik werd voor hen tot een klein Heiligdom in de landen waarheen ze gekomen waren which translates (roughly) to I was a bit of sanctuary for those who come to this land. 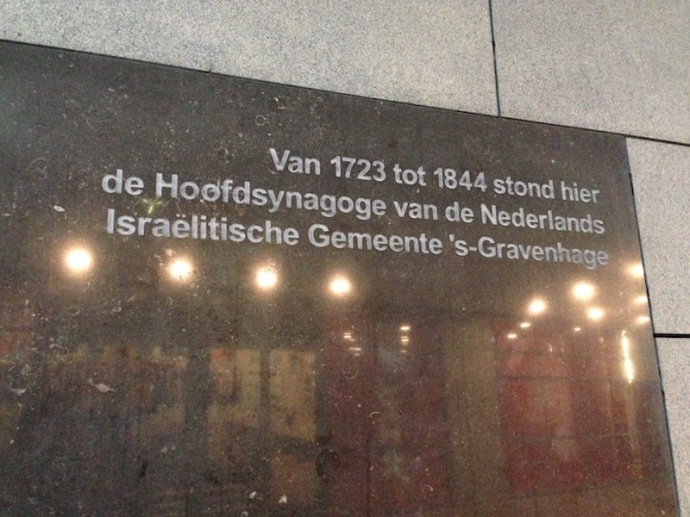 In 1844 the synagogue moved to the nearby Wagenstraat (now the heart of Chinatown). After World War II – from which most deported Jews did not return – the synagogue was closed in 1975. Around the same time the Muslim Turkish community’s numbers began to rise and in 1978 they asked the city for use of the space to turn it into a mosque.

This request was denied, but a group of Turkish Muslims took over the building by ‘squatting’ it. After three years the city granted their request to use it as a mosque. It now houses 1,500 worshippers. The original name of the mosque was Fatih, after a conquerer, but it was later renamed to Aqsa mosque as a reference to the Grand Mosque in Jerusalem.

Last week Marco and I visited the Grote Markt tram stop for a hidden gem: a 1616 city map recreated in the floor tiles and glass display cases of artifacts uncovered while constructing the tram tunnel.

The Grote Markt and Spui tram stops are found underground in the center of the city and service lines 2, 3, 4 and 6. The tram tunnel was a solution to the overcrowding of trams and cars above ground – once the tunnel was complete, the trams moved underground and cars were banned. These days only pedestrians and bikes are allowed. Of course, various problems caused the tunnel’s opening to be delayed 4 years and the cost was €100 million more than planned, but it did eventually open with much fanfare. 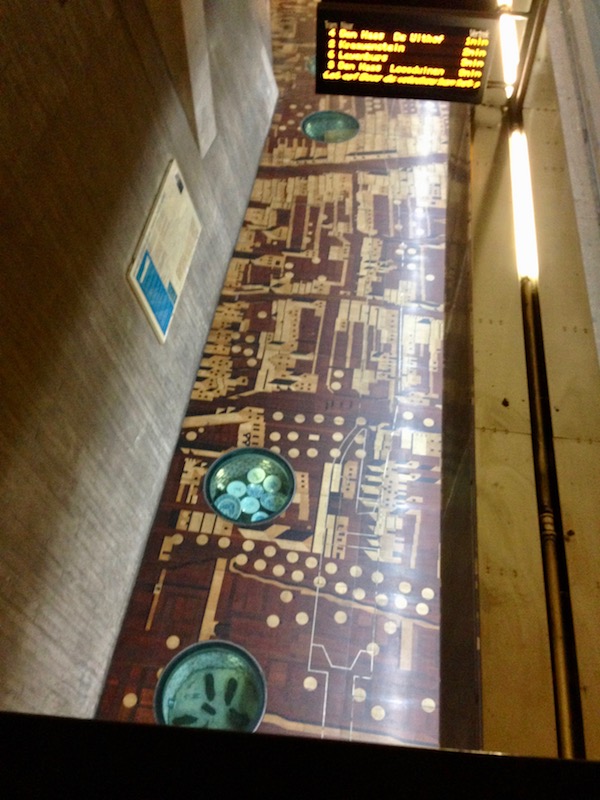 If you want to see the recreated city map and the artefacts, visit the Grote Markt tram stop (the entrance is by the statue of Haagse Harry!). Take the stairs underground and you’ll find yourself by a bridge above the platforms. Look left and you’ll see the city map in the ground on the same side you came in on. 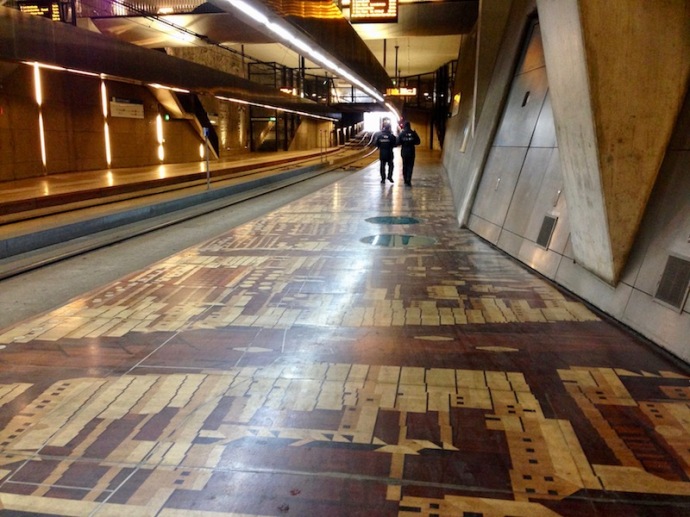 A look at the city map – with two HTM controllers walking away (controllers check to make sure you paid for your trip).

The 1616 map is also recreated on the wall, with the area where the tunnel would be built highlighted. During the tunnel’s construction, the surveyors were pleased to see how accurate the 1616 map was for stating where foundations and walls could be found.

END_OF_DOCUMENT_TOKEN_TO_BE_REPLACED

On Twitter I found reference to a web portal called Haagse Historie. The website went live yesterday, but unfortunately it is just in Dutch (but that is why we have website translators, right?). The website must be good – the front page currently links to the ‘Haagse Beeldbank’ (The Hague image bank). The first time I opened the website I was greeted with a lot of  tram pictures. Little known fact (maybe): I’ve fallen in love with trams and spend way too much time checking HTM‘s website, the bus/tram provider for The Hague and surrounding areas.

The web portal links to various websites like Haagse kaart, Fonds 1818, Haagse Herinneringen (Hague memories), and more. It also tries to find photos of your search term. If you’re not sure what to put in, try putting in your street name! I found a photo of my street from the early 1900s.

There is actually a lot of archival websites for The Hague. The Hague maintains a list, although the page is in Dutch. Finally, the website also mentioned that they opened a fifth Historisch Informatiepunt (HIP) in the Central Library on the 4th floor. It’s another way to research the history of The Hague and its neighborhoods.

Recently Marco and I explored the neighborhood (Rabbijn Maarseplein) just outside of Spui/Grote Markt, past Hema. I came across a statue of a woman:

I am not sure why the flowers are there, but I suspect it has something to do with World War II. There is also a nearby monument to Jewish children who perished due to the war. Amsterdam’s public transportation was recently stopped for one minute to remember the February 1941 strike in protest of the prosecution of Jews (Dutch | English).

But I am actually not finding much about the statue of the woman online. Does anyone know anything further?

A suitcase of WWII letters (Or: Found in The Hague)

Recently a suitcase full of WWII letters were found in the French restaurant Walter Benedict in The Hague. (Article: in English | in het Nederlands). These letters were uncovered during a renovation and were written by Israel Bachrach, a Jew living in The Hague. He wrote to both his mother and his non-Jewish girlfriend about how horrible it was to live in a German-occupied city.

In short – the restaurant was working on the renovations for the kitchen. They had questions about the room (dimensions or similar) and decided to go to the city hall’s archive to ask for the building’s blueprints. They were able to find blueprints from July 1941 which made it clear that there was an extra floor in the room (and thus a space in between the two floors to hide items). This is where the letters were found.

Walter Benedict was able to escape in September 1942 to Switzerland (via Belgium) though there were a few close calls where he was almost caught – but he made it out. After the war he returned to The Hague and opened a bookstore at the spot that would later be occupied by the French restaurant. 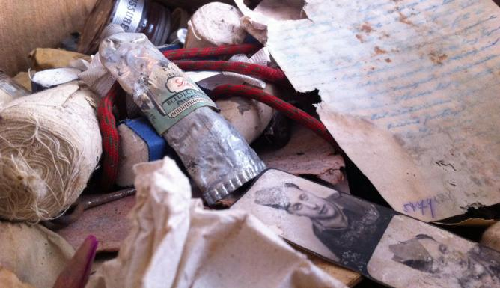 Dutch influence can be found all over the New York area. (Case in point – New York City used to be called New Amsterdam.)

One of the things Marco and I saw on the way to Bailey’s Smokehouse was this sign in front of a home:

You can read more by going to the Rockland Historical Society‘s page about the house. Apparently the first Dutch settler arrived in the area in 1683. Here is a quote from the page about the name “Blauvelt”:

“There are many guesses as to why the name Blauvelt was chosen. Some suggest that it is because in English, Blauvelt means blue field, this stemmed from the blue flowers which abounded in Gerritt Hendrickson’s grain fields. Another possibility is that Blauvelt originally was Gerritt’s family name when he arrived from Holland, but he just did not use it when he arrived in America. The blue field refers to the predominant color in his family’s coat of arms.” – read more

It really is all about the Dutch! At least on the east coast…

Assassinations (Or: Travel back to 1584)

Imagine coming down the stairs from dinner, and seeing a French nobleman at the bottom. Someone who you thought was on your side – but was in reality pointing a pistol at your chest and shooting at close range, killing you.

This was the fate of William the Silent, one of the leaders who revolted against the Spanish in the 16th century. He died after a reward was placed on his head and someone decided to track him down and kill him for it.