Streets (Or: Wandering through the Hague)

It’s been a crazy day, but it’s nearing the end. I will say the most random thing of the day was learning to use the JAWS screen reader to help a student find scholarly articles. The craziest was confronting another bus passenger (from a nearby psychiatric hospital, no less) about the laws of momentum and perhaps he would like to hold on to his cup of coffee, rather than letting it spill all over the floor?

Perhaps I’ll make a cup of koffie (coffee) later. But it’ll be straight – the only time I add anything is when Marco is around and we make french vanilla coffee. Yum, vanille suiker (vanilla sugar).

Marco was kind enough to take some pictures of some places in the Hague that hold special or fun memories for me. 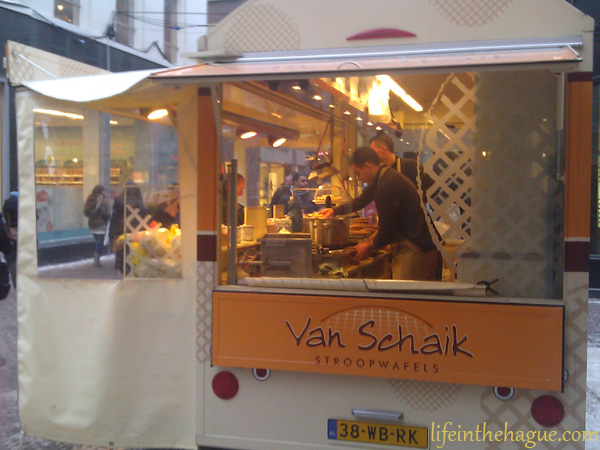 Stroopwafel vendor in the Hague. Warm stroopwafel is to die for!

I’ve mentioned stroopwafels a few times in this blog, but what’s another mention? Take two pieces of thin wafel and stick caramel in between. Stroopwafel vendors are awesome in the winter, since they heat it before serving it to you. If you try to microwave them, don’t go over 8-10 seconds, since there’s a lot of sugar inside!

My first stroopwafel from a vendor was a very yummy experience. If I remember correctly, Marco wouldn’t tell me where we were going – just that he wanted to show me something. He knows the best way to get to my heart is through my stomach! 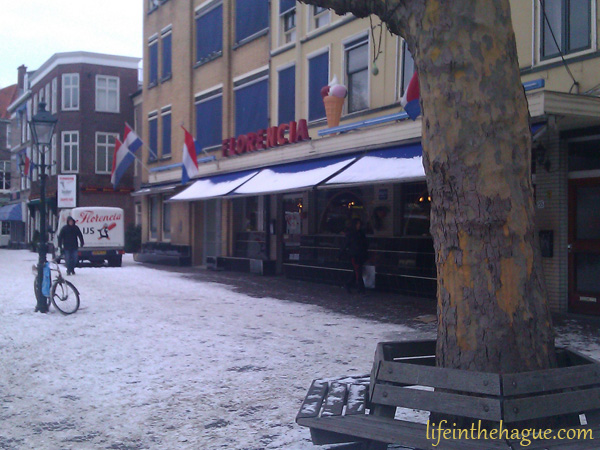 Ice cream shop in the Hague

Also on the topic of food, we stopped at this little ice cream shop and enjoyed a dessert one day. I am not quite sure what flavor of ice cream I got the first time (probably chocolate), just that we sat on the benches outside like the one in the picture and just talked while we ate. I know on a subsequent trip I tried out the stroopwafel ice cream.

I’ve heard that McDonald’s came out with a speculaas McFlurry, though it’s a limited edition type dessert. 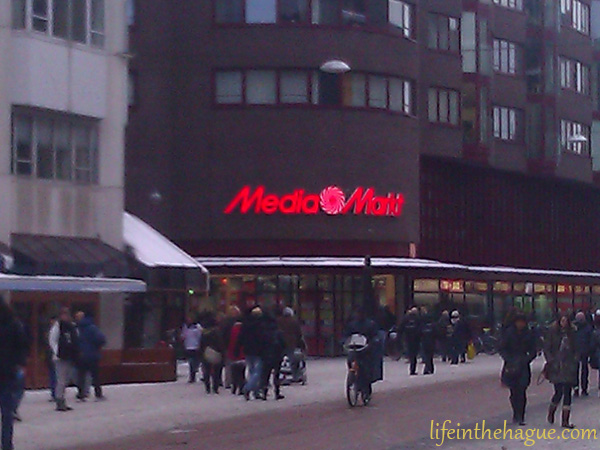 MediaMarkt (electronics store) in the Hague

And for something not related to food… our friend Roger’s favorite chain! Since Amazon or Amazon UK probably do not count. This is where Marco got his fridge (earlier blog post) and where a lot of DVDs are purchased. Or a printer when yours breaks down the night before a big flight!

2 thoughts on “Streets (Or: Wandering through the Hague)”