Last night was another Dutch class by ROC Mondriaan, where we met our Wednesday night teacher. While he is our teacher for the rest of the classes, the school still has not found a permanent teacher for Monday nights.

The teacher put some information about himself on the board – he is in his 60s and has been teaching Dutch for 34 years. He has taught Dutch for buitenlanders (people from other countries) for 14 years. Before that he taught Dutch for Dutch students ages 11 to 18. He loves language in general, and has written two books. He normally teaches by the ROC Mondriaan in Delft, so this was his first time in The Hague building. He didn’t even have a key for the classroom yet, or the textbook. So he brought along some other stuff for us to look at.

One thing was a story that we read aloud (voorlezen, to read aloud): 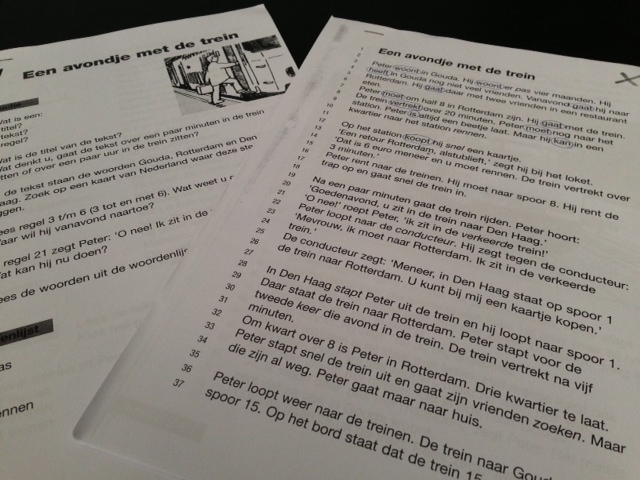 Not too bad of a story. Peter is trying to get from Gouda to Rotterdam to visit his friends. First he gets in the wrong train (it goes in the wrong direction) and then the second train is delayed (vertraging, a hated word among Netherlanders and Roger in particular). But on the third train, he meets a girl. The teacher taught us the phrase: “Een geluk bij een ongeluk” which is roughly “a good (thing) out of an accident” though it is really translated as “a blessing in disguise”.

He had another worksheet with just verbs:

Another thing that was mentioned was the nummer van de week, or the number of the week (It’s week 36 out of 52, by the way). I must admit I never thought about the number of the week I was in when I lived in America, but it does seem to be pretty important in the Netherlands for appointments. A few of the wedding to-do lists Marco made included the week number. Incredulous, I asked him why. Week x just does not mean anything to me.

Another interesting thing we discussed in class were Dutch words that are spelled the same but have two different meanings:

bank = where you go to deal with your money, but it also means ‘couch’

zijn = it means ‘his’, but it’s also the unconjugated ‘to be’ verb

licht = light (in terms of darkness, but also the weight of something. Same as English.)

regel = rule, but it also means ‘line’. In the story above the first page had 37 lines/regels. I also found it amusing that the word for ‘paragraph’ in Dutch is alinea, which to me looks like ‘line’…