The changing of the bikes (Or: Relocation)

It seems that The Hague has been working on the areas where people park their bikes. A lot of places had a sign on them (example below) stating that bikes could only be parked here until Tuesday, February 18. Any bikes left there after that time would be removed. You could then go to the central bike storage in the city and pay a fee to get it back – 25 euros! link in Dutch.

It seems that – according to some Dutch articles – that the bike stands are being permanently removed as they can cause damage to the bike when it is knocked over. Their solution? 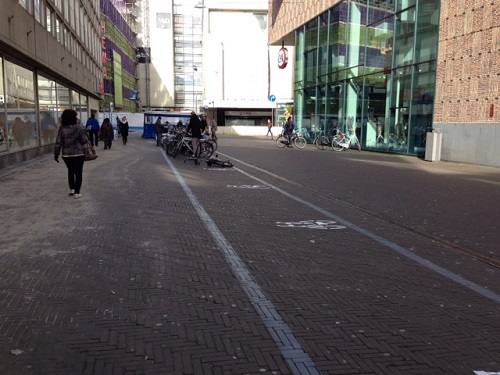 Chalk lines showing you where to park your bike. Not the most elegant solution, of course. We came back a few hours later after taking this second photo and the entire space was full, and people also placed their bikes against the building just like before – making it even more crowded for pedestrians to pass.