Marco and I visited Paris last week for about 36 hours — 11:00 Wednesday until 19:30 Thursday. A lightning trip! The reason was to meet up with my brother and sister-in-law who were vacationing in the city. Since they live on the west coast of America, it seemed to be an opportunity one does not pass up. The trip was under three hours by high-speed train (Thalys)…

Marco and I splurged a bit for this trip and traveled first class. One unexpected benefit was the use of the first class lounge at Rotterdam Centraal:

Perks of the lounge: fairly quiet, a free drink, and climate controlled.

Our hotel wasn’t far from the train station in Paris (Gare du Nord) – only about a 15 minute walk. After meeting up with my brother and sister-in-law, we retreated to our hotel room to apply vigorous amounts of sunscreen. And why might we do that, you ask?

Because the temperature for both days while we were there was around 36C (97F). Ughhhh! And in those two days Marco and I managed to walk 38km, or about 23 and a half miles. Don’t worry, the next three days we were extremely lazy and rested our poor aching feet.

First we visited the Louvre museum:

The iconic pyramids at the Louvre museum (the smaller pyramid is off to the right, barely visible).

It was at this point that we were already thrilled to see random street vendors selling cold water bottles for only €1. They could have easily charged €2 or €3 that day.

After that we walked over to Angelina Paris, a tea house known for its hot chocolate. Considering this was my lunch, you can probably guess how dehydrated I (subconsciously?) felt.

And here’s a look at some of the desserts they have on offer:

After that we headed out to help my sister-in-law find souvenirs for the family. (In the end Marco and I bought a small Eiffel Tower for ourselves.)

In that area we saw a Joan of Arc statue in front of Hotel Regina:

statue of Joan of Arc

We then ventured to the Royal Palace (Palais Royal) and I felt compelled to take a photo of the row of trees within its garden:

row of trees at the Royal Palace

And the Opera house in Paris, known as Palais Garnier: 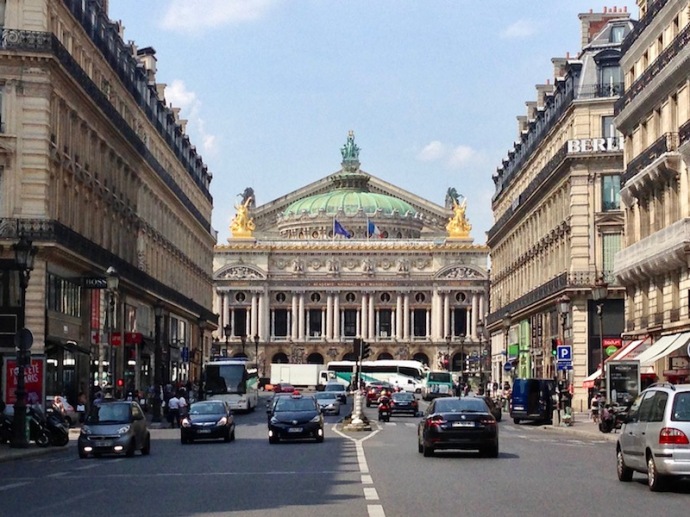 We then started making our way over to the “Lock bridge” or Pont des Arts — this bridge is one of the “love lock” bridges where couples place a lock on the bridge and throw the key into the river (to symbolise being together forever). In 2015 the locks, weighing then about 45 tons, were removed and it became illegal to place locks on the bridges. However, there were still many, many locks when we visited, except that these locks were not on the bridge itself but on the areas right next to it.

A small sampling of the locks – there were probably 10 times as many.

After that we headed down to the base of the river to catch a boat tour. My sister-in-law had heard that the Eiffel Tower glitters for the first five minutes of every hour, so she was trying to find the right boat time slot to book for being next to the Eiffel Tower when it glitters. We selected the 10:15pm boat and actually caught a good glimpse of it – we were only about 3-4 minutes too early to be next to it then it started.

But on the way to the Eiffel Tower we began to notice just how many people were crowded along the canals and just partying, drinking and having fun. We thought this was really weird to be honest (don’t these people all have jobs in the morning?) but figured maybe it was the warm summer’s day that was drawing people out of their homes. Or maybe every day was a party in Paris… 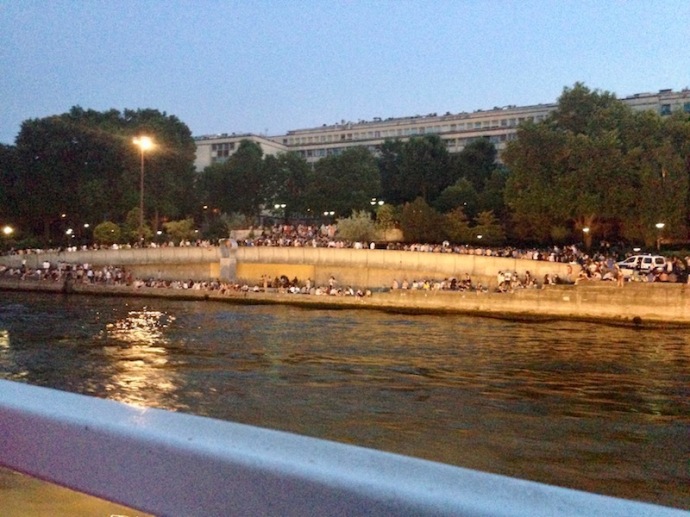 Crowds of people gathered to cheer us (and our boat) on… or just to party. Yeah, probably the second one.

Long after we returned to the Netherlands we learned that the reason for the massive party was due to a yearly music festival that is always held on the longest day of the year. But it was surreal to see so many people lined along the canals and cheering at us as we passed, or later, the throngs of people dancing in the streets. In some side streets it was so packed you could barely move. Oh, and one truck passed by with a rack of loudspeakers blaring Jamaican music. Celebrating the summer solstice in style!

At the very end of the boat ride we came across the Eiffel Tower. Actually, we could see it from far away…

The disco lights at the top (barely visible here) were unexpected. But it was definitely a pretty sight!

And a closer photo: 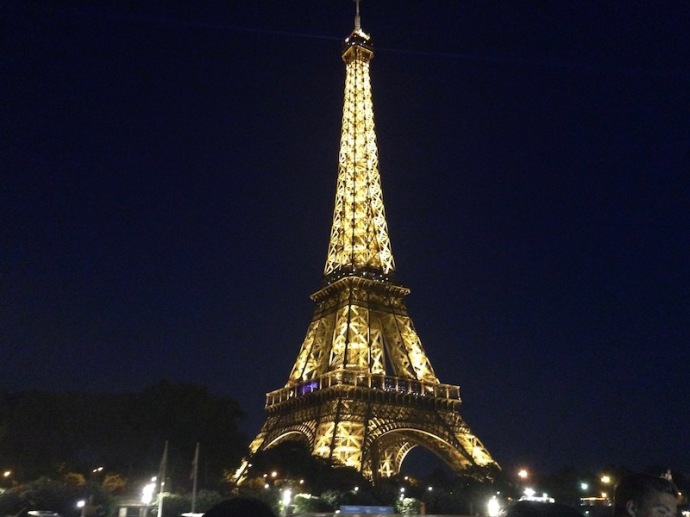 As I said the tower does “glitter” and “sparkle” at the top of the hour, but that also makes it harder to take a good photo. So you will just have to trust me that it was pretty!

And that was the end of day 1. I’ve never been so glad that the hotel room was set to 20C (68F). Even approaching midnight, the temperature was still in the mid 80s.