Bizarro world (Or: Changes at the movie theatre)

Do you want to read something really bizarre?

Of course, it is completely logical that the movie theatre chain is required to close shops and buffets, since restaurants and cafés are closed right now as well. And before you start hoping you can bring in McDonald’s or a full pizza, Pathé did say by “snacks” they meant popcorn and chips. Darn.

Ypres chestnut tree battered but unbowed by wars wins Belgian award from theguardian.com. Short story: 160 year old tree survives repeated bombings during WWI. It grows back with four separate trunks (!). It then avoids being chopped up and turned into firewood during WWII.

The Netherlands also has their own award: De boom van het jaar (The tree of the year). Check out the trees that were nominated last year. I think my pick has to be the 9th tree, from the Overijssel province. I mean, the tree even goes through the roof of a tiny house. To clarify, it is not a house anyone lived in, but rather a tiny “house” that was used to bake bread apparently.

Avengers: Endgame (Or: Seen it!)

Just got back from the midnight showing. Totally worth it!

A late night (Or: Ajax football and Captain Marvel)

Note: there are no spoilers for Captain Marvel in this post.

Last night was a fun night with Marco and Roger. First off, we watched the Ajax-Real Madrid Champions League football game. Amsterdam’s Ajax team lost the previous match against Real Madrid 2-1 so they needed to win by at least two goals last night to proceed to the quarter finals. And that they did – winning 4-1! The coolest goal was the last one Ajax made (YouTube).

The best part about the game was that it started at 9pm and ended around 11pm. Which was really good for us, since after that we were going to a midnight showing of Captain Marvel. Generally movies premiere on Wednesdays in the Netherlands, and since 12:01am is also Wednesday… yeah.

Fun thing: I noticed that the movie theatre had ruby chocolate KitKats. If you’ve never tried ruby chocolate, you should. It is a bit sour, but still sweet like chocolate.

While we were waiting in the downstairs lobby (the upper part was roped off so they could clean the theatre from the previous showing) I took a picture of The Hague’s library:

The movie was pretty good. I liked it and was definitely entertained even though I was sleep deprived. I thought the cat stole the show. More about the cat here, with a few minor spoilers if you don’t read the Captain Marvel comics.

And lastly: of course there is a Stan Lee tribute. The theatre clapped for that.

Self-serve! (Or: Starbucks at the movie theatre)

Earlier in the month we saw Guardians of the Galaxy vol. 2. Great movie! While there I was able to check out the new coffee options, as the Pathé movie theatre by Spui now has self-service Starbucks coffee.

Apparently it’s been around for a few months but this is the first movie I had seen since they installed it. 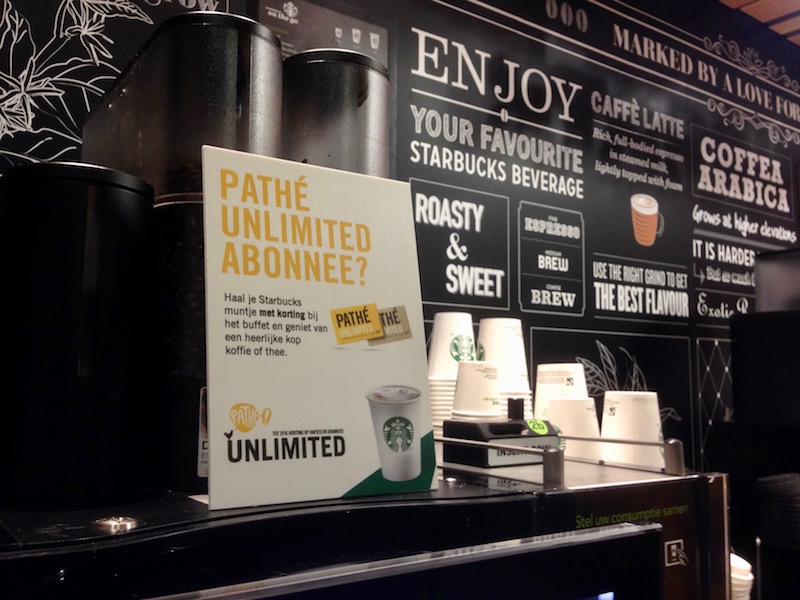 Of course you don’t have all of the options you would with a full-service Starbucks, but it is still some nice coffee, especially when viewing a movie in the morning!

Frozen deliciousness (Or: A new addition at Pathé Spui)

A few weeks back Marco, Roger and I went to Pathé Spuimarkt (the local movie theater) to see X-Men: Apocalypse. Marco was pleasantly surprised to see a newly installed frozen Fanta machine. 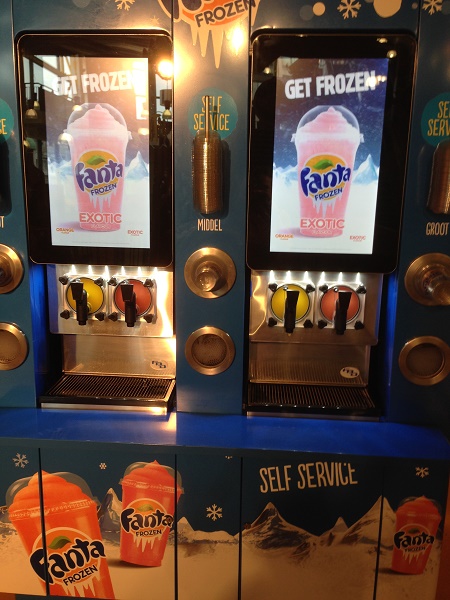 One of his favorite treats when visiting America is ICEEs (a type of frozen slushie). Of course ICEEs are even better than Fanta’s frozen drinks, but when you’re not in America you take what you can get!

Deadpool (Or: A movie for the ages)

It is almost time to go see Deadpool! Marco, Roger and I have tickets later in the week to see it (it came out today). It’s what I like to call a superhero movie for adults…

The advertising is rather crass, although remarkably funny. Marco says he almost wishes the advertising would continue on even after the film is released, as it’s that good (read: weird/crazy/unexpected).

My favorite is the billboard that makes the movie seem like a romantic comedy, just in time for Valentine’s Day. (There is also a synopsis about the film at that link if you are interested.)

If you want to see more of the crazy marketing Fox has done in advance of Deadpool, check out the WIRED article.

Finally, I’m a geek. I’ve also blogged about the movie candy when we went and saw Thor: A Dark World. Or when I posted about Iron Man 3.

Last Sunday morning Marco, Roger and I went to the movie theater in town to see the new Thor movie, Thor: The Dark World. As sometimes happens, this movie was released in the Netherlands a full week before it was released in America.

The movie was pretty good – the pacing was pretty nice and I didn’t feel that the middle or the end of the movies dragged too much. It was nice to see more character development with the side characters (including Darcy) and of course Thor as eye candy is always good. They have a shirtless scene near the beginning for Thor-approving fans!

Before the movie I took a quick moment to take a picture of the candy options, although it’s not really something I would ever purchase (even ignoring the insane movie theater prices): 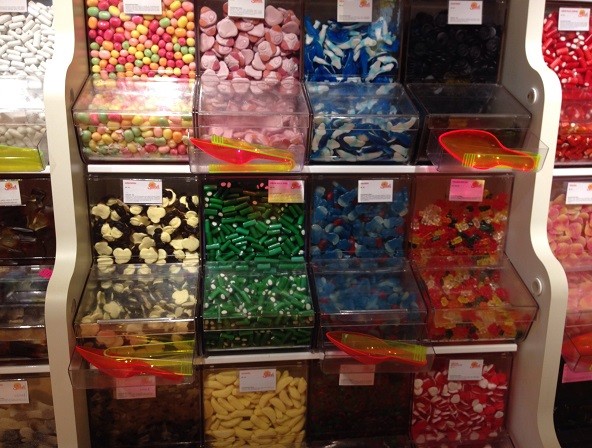 As you can see it is not that much different from the setup of a typical American movie theater – similar candy is offered there as well. The one thing I was tempted by were the sour bears on the left side of the 2nd picture, near the bottom. Yum, sour candy!

On Wednesday night, Marco Roger and I went to the Pathé theater in The Hague to see Iron Man 3. For some reason, the movie came to the Netherlands and other places a week before America. I won’t complain! It was a bit easier to ignore the Dutch subtitles at the bottom this time. (I don’t have a problem with them, but they are a bit distracting as I try to analyze the sentence structure.)

Oh, and I also decided that Maltesers (a British candy) aren’t nearly as good as Whoppers (an American candy which is a bit crunchier). It is the same concept, though.

In the Netherlands, “Despicable Me” is entitled “Verschrikkelijke Ikke”, which I don’t remember how to translate except that it’s more of a “kid speak” type title.

It was a pretty good movie – it showed more of the human side of Tony Stark (Iron Man), although personally I liked the first movie the best. Although that was because I didn’t know just how sarcastic the Stark character was and so I was new to the character.

One thing I liked a lot about this movie was the comic relief character (you will see who/what I mean). Also the younger character had some funny lines as well. 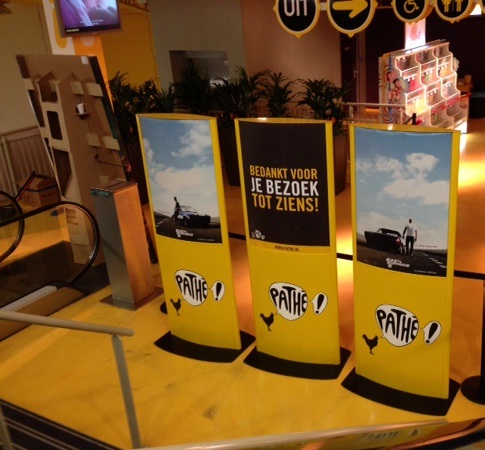 “Thank you for your visit. See you later!”

After the movie we walked a bit down the street and came across one of the outdoor café areas. It was too late for anything to be open (11:30ish) but there were still people wandering around:

Dutch theaters (Or: Staring at the ondertitels)

In a previous post, there was some talk about Dutch movie theaters. Here is what I have learned about them:

1. Most importantly, the major English movies are still in spoken English. Generally a movie is shown in its original language.

2. Most (or all?) of the movies I saw had Dutch subtitles (ondertitels) at the bottom of the screen. For me, this was distracting – in a good way. At times I found it more fun to stare at those then to actually look at the movie itself.

3. There is assigned seating. When you purchase your ticket at the ticket machine, you pick the exact seats you want. This is nice since it lets you see what seats have already been taken. Of course with movies which have been out for a while this isn’t as big a deal, but it’s good to stake a claim.