Christmas crafts (Or: The joy of the unexpected)

One gift that made Marco laugh (for a long time I might add!) was made by Marco’s dad and his wife:

How cute is that? We now own two melted snowman! Complete with the melted ice (safely stored in a water bottle) and a tiny plastic bag containing his hat, nose, eyes, and mouth. Hehe!

Another craft from them was the yearly Christmas card – check it out!

And a much deserved close up of the Christmas card, so that you can better see the intricacies of it:

Just a bit of snow (Or: Buitenhof in the winter)

The Netherlands has been under a cold spell recently. The wind changed direction and started coming from Siberia. No joke. There was one day with a temperature that felt like -20c (-4f). Brrr!

But it did bring out some nice photos, including one of mine: 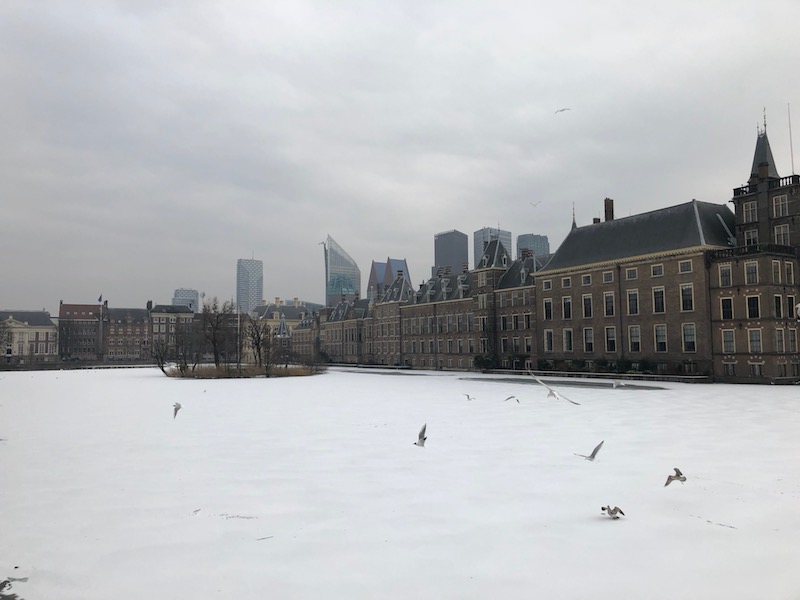 I am happy to report that the wind changed direction on Sunday, so the breeze bit of snow is now gone again. Not that I have anything against snow, but this country definitely doesn’t know how to deal with it.

In the last two days we’ve received more snow than I’ve probably seen in the almost 5 years I’ve been here (and wow, next Monday is officially 5 years!) Yesterday wasn’t too bad – most people did not have to work. Indeed, Marco and I went outside yesterday and took some pictures. 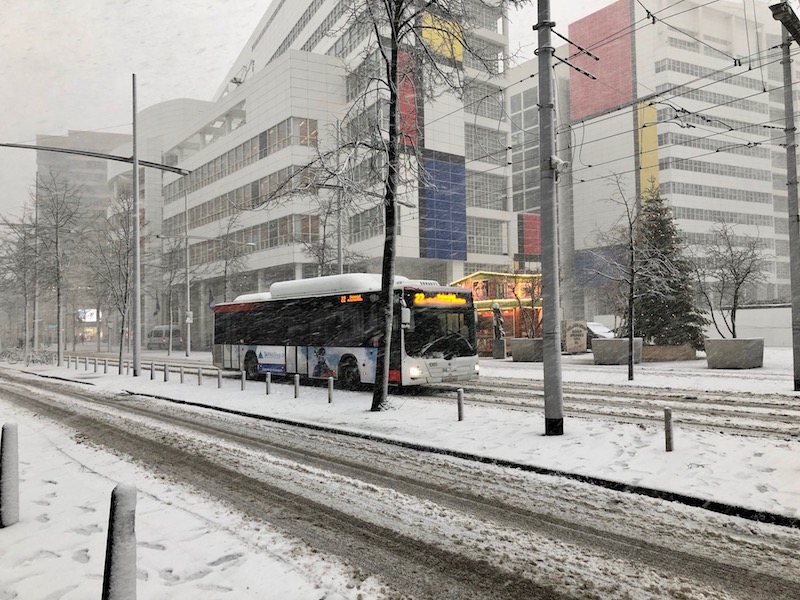 snowfall yesterday. bus 22, with the oliebollen stand behind

But today would prove to be slightly more chaotic. Schiphol is currently trying to decide if they put out bedding for stranded travellers; about one third of the flights are cancelled and buses and trains aren’t running there. No trains to or from Amsterdam or Utrecht (in the heart of the Netherlands) at the moment. For a while the HTM buses here in The Hague stopped riding, but some lines are riding again.

I knew I had to go into work – my work computer was there! – but Marco was kind enough to walk me to my tram stop. It started snowing again in the late morning, so I stuck around until just after 1pm, and then went home to finish off my work there.

END_OF_DOCUMENT_TOKEN_TO_BE_REPLACED

Snowmageddon (Or: Snow in The Hague)

Okay, obviously the post title is a joke! But still, I was able to take some pretty pictures over the weekend of the snow in The Hague. 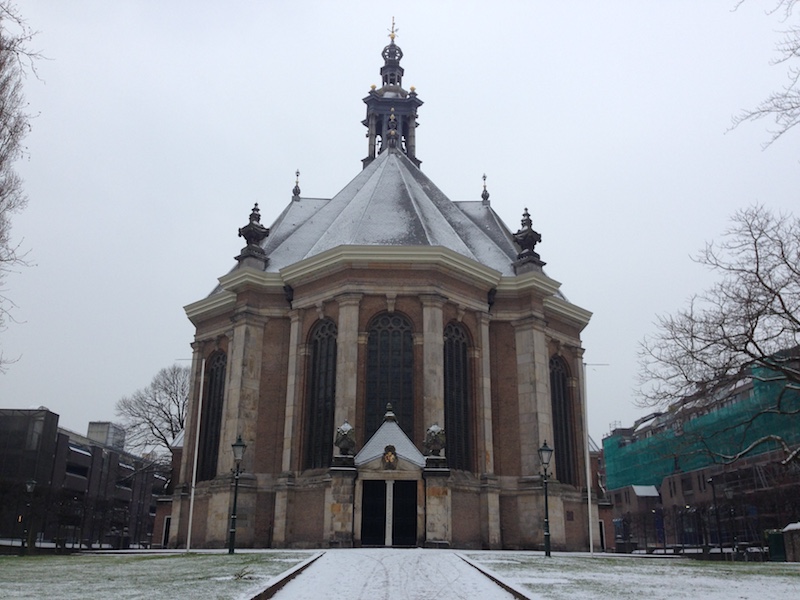 Considering the level of snow some parts of America get, this is obviously nothing. But still, it’s been about four years since I’ve seen snow in the Netherlands – there was some snow in 2012-2013 when I moved here (and way too much ice) but since then not much. The one time we really got snow, Marco and I were on vacation out of the country. 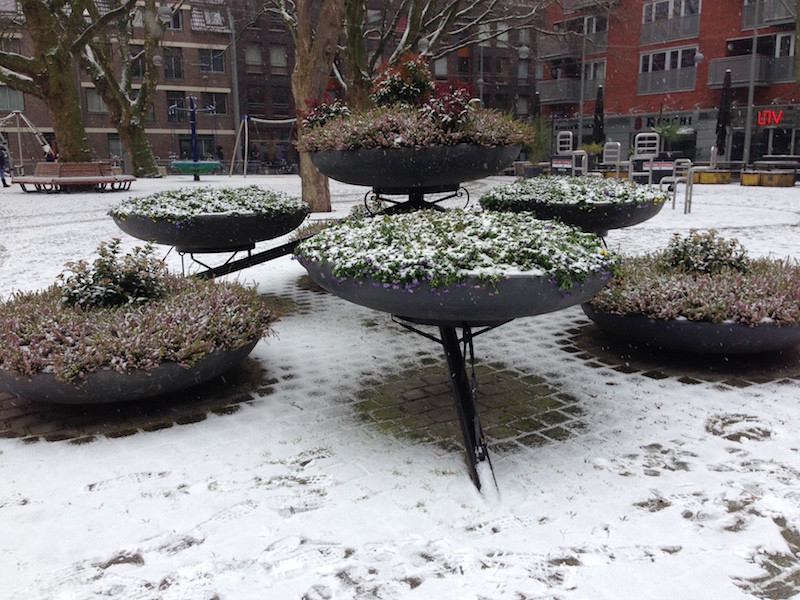 Both of these pictures were taken on Saturday. Overnight into Sunday we actually got a bit more snow – about an inch – but it’s all but melted now. But it was fun to see how happy the kids were to play in snow.

A neighborhood police agent was filming with a body camera as he participated in a (playful) snowball fight with kids from the Moerwijk district – see the video of the snowball fight on Omroep West.

This picture is from last week, from the nearby city of Rijswijk. Unfortunately the Netherlands is currently warming up again, so most of the ice has melted. 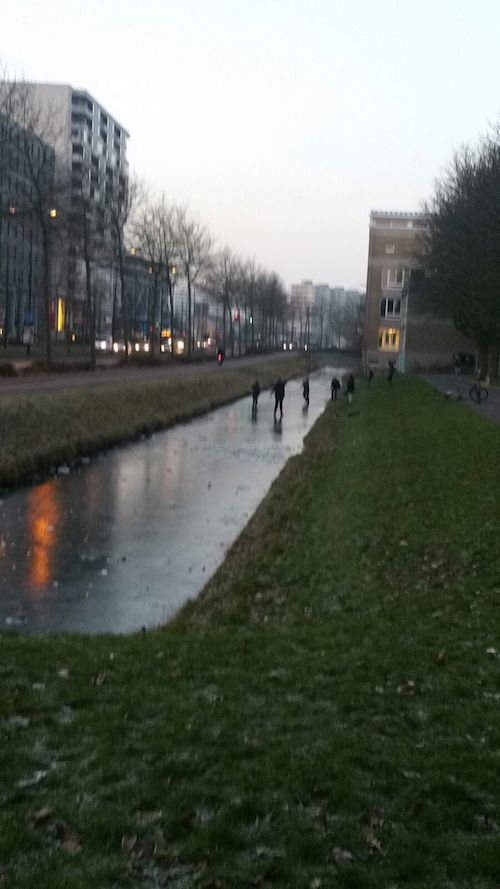 Marco reported that there were no… accidents… or falling through the ice while he was watching. Since Friday it has been warmer, so the chance of skating on natural ice is pretty low until it turns colder again.

Mondays (Or: Surrounded by snow and DVDs)

So, it started snowing today. Not a lot of course, but something: 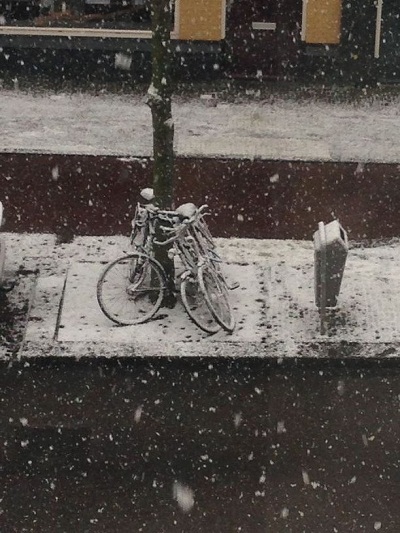 Today was definitely a slower day. I went to Albert Heijn to pick up some grocery items.  I did pretty good in terms of figuring out the language, even correctly figured out that the cashier was asking if I had an extra 20c piece (truthfully all I heard was ‘twintig’ and I guessed). I was thrown off a bit when she asked for my bonus card, as I did not think I picked up any bonus items or anything on discount. But when I looked over the receipt later I did see some savings, so it is probably best to just present it each time.

A few hours before Marco returned home from work I decided to take a crack at organizing his DVDs again. As he had moved around a lot of stuff in his apartment to make room for me and my items, his DVDs ended up being put back in rather jumbled order. Today I just worked on sorting his blue rays and his wrestling DVDs. I still have TV shows and DVD movies to go (whenever). Those tend to be the two largest sections.

Lastly Marco and I watched the 2009 Star Trek movie, the reboot of the original series. I never watched that TV show, although I understand most of the Kirk/Spock/etc jokes that have entered the culture. Growing up I generally watched Next Generation, Voyager, and DS9. But I never got into the last version, Star Trek Enterprise. Even if it did have Scott Bakula from Quantum Leap…