Hurricane Sandy (Or: I am spared)

[Note: I am absolutely fine. I lost power from 8:30pm to 3:30am, but that’s it. The winds have really died down. Though I will admit to being a bit afraid at times last night around dinner, since the wind was so loud.]

Here’s a quick rundown link of everything I missed while asleep.

pictures of a lone carousel (lights still on) surrounded by flood waters. As this was taken hours ago it is almost definitely gone. It’s in Brooklyn. Here’s a reference picture taken a while back (on Wikipedia) to understand why it’s now underwater.

Latest word was 6.5 million without electricity.

Obviously I haven’t really been outside. But I did take one picture, as a way of comparison. Eight days ago I posted a picture of the beautiful red leaves on the tree right outside my door. 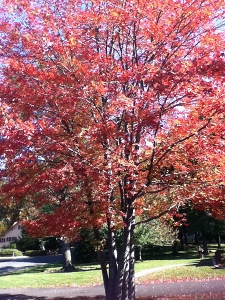 Admittedly some of the leaves had already fallen off, but now it just looks sad. I took this last night as the darkness stared.

I also wasn’t expecting the noise of the wind when I opened the door long enough to take this picture. And the extra bit of strength I had to give to close the door again!

Not sure if I can try the sleep thing again, as I am wide awake. But we’ll see.

2 thoughts on “Hurricane Sandy (Or: I am spared)”